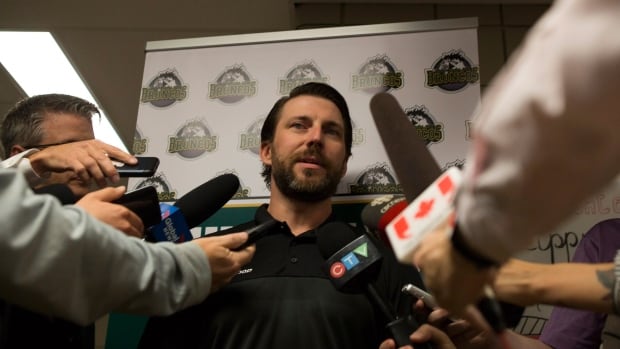 As head coach Nathan Oystrick skated around the ice barking orders at his new players on Friday night, the Humboldt Broncos looked like any other junior hockey team in training camp.

About 50 people sat in the stands watching the team for the first time since the April 6 bus crash that killed 16 people, including 10 players. Thirteen people survived the crash, including Xavier LaBelle, who was among those looking on.

Oystrick said before camp got underway that he isn’t sure how he will pay tribute to last year’s Saskatchewan Junior Hockey League team.

“Right now this is about our team moving forward, but there’s definitely a lot of things in the works to honour last year’s team and the people we lost,” he said.

Despite the increased attention to this year’s edition of the Broncos, the camp had all the regular smells of any hockey practice, with sweaty gear filling Elgar Petersen Arena.

A pair of ribbons with the Broncos’ colours are painted into each end of the ice and a new scoreboard is in place above the team’s logo.