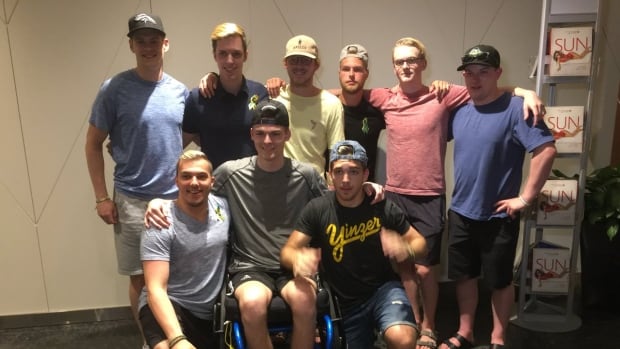 Ten of the people who survived the deadly Humboldt Broncos bus crash on April 6 have reunited in Las Vegas.

On Monday night, they caught up around the table of a hotel restaurant — some together for the first time since the collision that killed 16 people.

“It was something very special. We all missed each other,” said Kaleb Dahlgren.

“It’s something that you cherish.”

The team will be honoured at the NHL Awards ceremony happening Wednesday. Additionally, the late Humboldt Broncos head coach Darcy Haugan has been nominated for the inaugural Willie O’Ree Community Hero Award.

“He was very inspirational to our team,” Dahlgren said, adding he taught them lessons on and off the ice.

“People have other things in their lives as well that they have the same type of thing happen to them, they have to get through it themselves,” he said.

“I’m lucky enough to have 13 others to help me through.”

Dahlgren said they are busy with media conferences today and on Wednesday they’ll be tied up with the rehearsal and award ceremony. Despite the obligations, Dahlgren said the survivors hope to catch a movie tonight — and go for a swim if they can squeeze it in.

The reunion has been emotional.

“I’m missing all the boys, Dayna [Brons], too. I don’t know, it’s just it’s pretty sad, but happy to be here with everyone who did make it,” said Xavier LaBelle on Tuesday.

“It’s good because everyone was spread out after the accident.” ​

The time together has allowed them to reflect on the memories that were made during the season, he said. Currently, LaBelle is taking his recovery day by day. He said he’s not allowed to play contact sports for two years and has to hold off from attending university.

He plans on attending his Grade 12 graduation at the end of June and upgrading his high school classes in the fall.

On August 24, NHLer Chandler Stephenson will bring the Stanley Cup to Humboldt. Other hockey players will also make an appearance in the community on the same day.

The event will involve an on-ice component involving NHLers and Humboldt Broncos survivors. It was announced at a media conference held by the NHL and the NHLPA on Tuesday afternoon.

At the conference, some of the players shared what their future plans were. For example, Derek Patter said he will don green and yellow again and returns to the Humboldt Broncos next season.

Graysen Cameron told the audience he will be the assistant coach of his former AAA team in Red Deer.

Jacob Wassermann said he was inspired by a visit from Rick Hansen.

“He just told me to live my life the same way I was before. There is no limitation in the world as long as I don’t put them on myself,” he said.

The Humboldt Broncos commemoration at the NHL award ceremony is likely to be one of the most memorable moments of the night, said Steve Mayer, the NHL VP and chief content officer.

“The fact that we are bringing together 10 surviving players who are seeing each other together for the first time since that horrible bus crash, you know, that to me will be unbelievably emotional,” he said.

“We wanted to give this moment to sort of honour, tell everybody that we’re still thinking about them,” Mayer said.