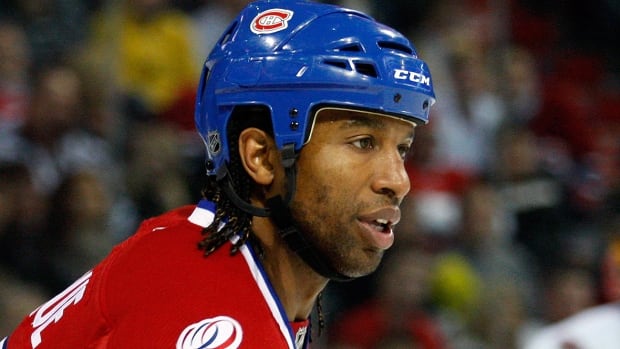 A couple of weeks ago, former Montreal Canadiens tough guy Georges Laraque was running five or six days a week as he trained for a marathon.

Now, the former NHL enforcer’s biggest challenge is trying to breathe clearly as he fights COVID-19 from a hospital on Montreal’s South Shore.

“Now I can’t even get up without losing my breath. It’s insane,” he said.

In a series of videos from his hospital bed, the 43-year-old, said he began feeling symptoms last Sunday, at a time he was helping to deliver groceries to vulnerable people in his community.

Former Montreal Canadiens enforcer Georges Laraque has been released from hospital after contracting the virus. 6:05

Over the next days, his condition deteriorated.

“I have pneumonia in both my lungs, they’re affected by the COVID because I have asthma, I have to have oxygen blowing through my nose,” said Laraque, who wore a hospital gown and could be seen coughing at times during the videos.

“The nights are the worst,” he said a moment later. “At night, I have fevers a couple times a night. I have to get up and take pills.”

Laraque thanked the staff at Charles-Le Moyne hospital who have been taking care of him, and told people not to feel sorry for him because “I’m not the only one fighting this.”

The former hockey player questioned the Quebec government’s plan to gradually reopen elementary schools and daycares beginning on May 11, given the limited amount of testing taking place.

“If you can’t test all the kids in school, it’s not going to be a safe environment for the parents and the teachers that are already way underpaid, so for two months of school is it worth it?” he said.

Laraque played parts of 12 seasons in the NHL from 1997 to 2010, including eight with Edmonton. He capped his career with two seasons in Montreal.