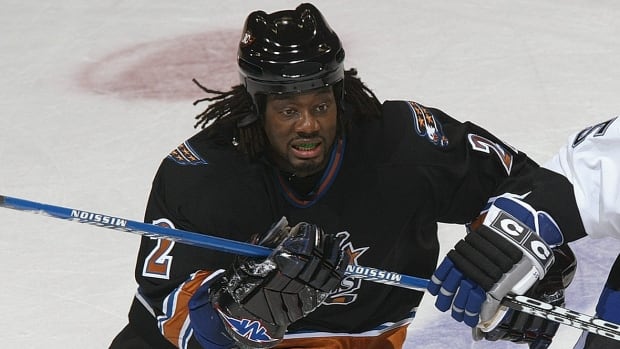 Former NHL forward Anson Carter wasn’t surprised when news broke Monday night of a video being posted online involving Ottawa Senators players joking about and criticizing their team’s coaches and defence. He thought it would be occurring more often.

“You see cameras all the time. People could be eavesdropping on conversations or live streaming them,” the ex-player-turned studio analyst says over the phone.

Seven Ottawa Senators players are apologizing after a video surfaced of them trash-talking and ridiculing their assistant coach. Postmedia found the video on social media and re-posted it. 4:18
“Even though you think you’re in a car by yourself, somebody’s always watching and listening,” says Carter, who last played an NHL game during the 2006-07 season for Carolina. “I go into every car assuming someone is listening.”

Carter didn’t act that way before the Washington Capitals acquired him in a Jan. 23, 2004 trade with the New York Rangers for fellow forward Jaromir Jagr.

Shortly after reporting to his new team, an appreciative Carter was told the private driver for Capitals general manager George McPhee (now GM of the Vegas Golden Knights) would take him to his condo in New York so he could grab some belongings before the team’s next game in Philadelphia.

Sitting in the back seat, Carter says he was on the phone with his hairstylist to help arrange her flight to New York from Edmonton, where he had played the previous season. When you have dreadlocks and find someone who does your hair properly, says the Toronto native, you go to great lengths to have them see you.

“He was ripping me about something and later said, ‘We do you a favour to let you get your stuff in New York and you’re taking advantage of flying in broads and partying?'”

Shocked at the accusation, Carter left the meeting to join his teammates at practice but couldn’t stop thinking about his coach’s words. He later infered that McPhee’s driver must have twisted the story and told the GM and/or Hanlon.

“He probably heard ‘Female, flying in early, on a day off,'” Carter says of the driver. “He’s not hearing about her doing my hair. I was pissed. This was an invasion of my privacy. Someone was eavesdropping on the conversation and [the Capitals] either planted this guy … and that was not a good look.”

Carter, who was dealt to the Los Angeles Kings less than six weeks later, said he never discussed the matter further with either McPhee or Hanlon and hasn’t had the opportunity to do so since. Hanlon now coaches in Hungary.

You wouldn’t expect them to throw you under the bus since they’re paid to take you from Point A to Point B, but now I know.— Former NHL forward Anson Carter on Uber drivers

The Capitals, under different management, said they no longer have a personal driving service for the team.

Carter, who played for eight teams in 10 NHL seasons, says he chose to share his “eye-opening learning experience” to warn athletes to never assume the driver from a car service will respect your privacy.

If Carter receives a call from his wife or two daughters while travelling for work with NBC and MSG Network, he tells them he’ll call back when he’s in his own car.

“I don’t trust any of these drivers,” he says. “You wouldn’t expect them to throw you under the bus since they’re paid to take you from Point A to Point B, but now I know.

Zack Smith and Craig Anderson fielded questions about their teammates’ conduct during an Uber ride in Phoenix in October. Seven players have apologized for mocking assistant coach Martin Raymond. 0:35
As for the aforementioned Senators who criticized their coach, Carter says players’ airing such feelings with each other “is no big deal,” noting coaches during his playing days were also critical of players behind closed doors.

Hockey Night in Canada host Ron MacLean agreed no one should be shocked that people may make inappropriate comments while kibitzing late at night.

“This story … is just really troubling,” he said in an upcoming Hockey Night in Canada podcast. “It creates in us a little paranoia about ‘God, if we ever go out drinking again what do we do?’

“I don’t know what we could have done to maybe alter the storytelling … but one thing that really leapt out at me when the story broke was the way it finds its place at the front of the headlines without nuance, without maybe a fairer reporting of understanding, of compassion, some of the things that I think are appropriate.”

A group of Ottawa Senators players got caught red-handed talking about their coach… but only because an Uber driver released his dashboard footage. Who messed up more? 1:17

Ottawa entered Tuesday’s game against New Jersey with a 5-6-3 record and 29th among 31 teams with a 68.8 per cent success rate on the penalty kill.

“I’m sure the guys on the penalty kill aren’t just carving the coach and not saying anything in the room,” says the 44-year-old Carter, who scored 202 goals and 421 points in 674 NHL regular-season games. “You want to have that constructive conversation [with the coach]. That’s how you improve.”

The video recording is the latest scandal for a team that’s been riddled with them lately.

Negative headlines dogged the Senators last season, including a threat by owner Eugene Melnyk to move the team if ticket sales didn’t improve. And in May, the wife of former captain Erik Karlsson filed an order of protection against Mike Hoffman’s fiancee, claiming she had posted over 1,000 “negative and derogatory” comments about her on social media. Both Karlsson and Hoffman were traded in the off-season.

“Unfortunately, it’s another blemish on the organization but I like how the team has played so far this season,” says Carter. “I think their future is bright with [rookie forward Brady] Tkachuk, [defencemen] Chabot and [Maxime] Lajoie, [forward Jean-Gabriel] Pageau and [Craig] Anderson in net.”