The first Inuk to play in the National Hockey League is retiring.

Jordin Tootoo, 35, made the announcement Friday afternoon in Brandon, Man., where he began his hockey career playing for the Brandon Wheat Kings of the Western Hockey League in 1999.

“This community has embraced me and looked beyond Jordin Tootoo the hockey player, they just didn’t judge me for how I played the game.”

Tootoo, who’s from Rankin Inlet, Nunavut, recently celebrated his 15-year anniversary with the NHL and said he’s “retiring with no regrets.”

“It’s been a great run and now it’s time for me to move onto the next chapter of my life,” he said, adding he plans to “continue to work to enhance life for Native children who are suffering.”

He said he wants to work with communities on mental health awareness and to support suicide prevention initiatives.

After the Wheat Kings, Tootoo went on play in the NHL’s Nashville Predators, Detroit Red Wings, New Jersey Devils and, most recently, played right-wing for the Chicago Blackhawks during the 2016-17 season.

He also played for the American Hockey League with the Grand Rapids Griffins and Milwaukee Admirals.

“I owe my life to this game,” he said, noting that the city of Nashville embraced him when he was grieving the loss of his older brother Terence Tootoo, who committed suicide in 2002. 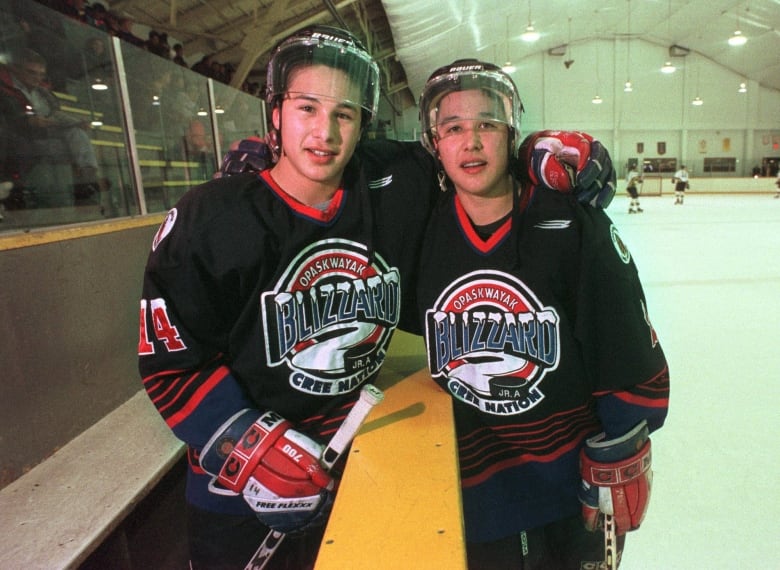 Tootoo at age 15, left, with his brother Terence Tootoo, 18, in Portage La Prairie, Man., in 1998. The two were playing for the Opaskwayak Cree Nation Blizzard. (Fred Greenslade/Winnipeg Free Press/Canadian Press)

“My brother Terence was my inspiration both in life and in the afterlife,” he said. “His final words to me were, ‘Jor, go all the way, take care of the family, you are the man.'”

He added: “I can only hope I lived up to your expectations, bro.”

Tootoo — who described the loss of his brother and his own struggles with alcoholism in a recent autobiography — also credited people within the organization for helping him realize he needed help to address his drinking.

“It’s difficult to describe the emotions I feel as I look back. I’ll sum it up in one word: gratitude,” he said.