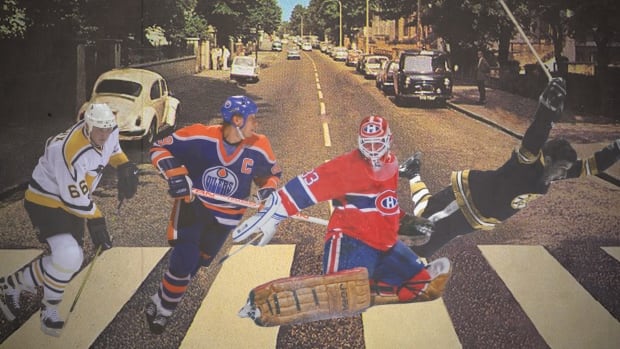 If you were to walk into my house at any time, there is a good chance that one of two things will be a playing: a hockey game, or the Beatles.

For as long as I can remember, I have been a huge fan of both.

Recently, while watching highlights of Matthew Tkachuk’s insane between-the-legs goal, and playing the new Abbey Road 50th anniversary deluxe boxed set (which is awesome by the way), my wife gave me an inquisitive look and asked: “If the Beatles were hockey players, who would they be?”

What a question! There were so many factors to take into account. Length of career, significance to the sport, how much the player’s career paralleled one of the Fab Four. I started muttering names out loud. Some made sense; others were quickly discarded as not being Beatle-worthy.

Then I thought, why stop at the Fab Four? What about producer George Martin, Pete Best, and dare I say…Yoko? (By this time my wife was long gone. She knows better than to try to make sense of my ramblings.)

After some careful thought, this is what I came up with. These are not who I believe are the best four players of all time, just who I think would fit the role of the Beatle the best. That being said, we are talking about the most famous band in history, so don’t expect any fourth liners on this list.

We saw both at the absolute strength of their powers, but for reasons beyond their control that’s all we saw. Orr suffered a knee injury that forced him to play in pain and ultimately retire early. Lennon was murdered in one of the most tragic events in music history.

We can’t possibly know what might have been if these two masters were able to continue doing that they did best. If Orr had suffered that injury with today’s medicine, a doctor would take a sad song and make it better. Orr would have been back in the ice in about two weeks.

Lyric: “Life is very short, and there’s no time for fussing and fighting, my friend”

Both had success with two different bands/teams. Sure, their peaks were pretty obvious — Wayne with the Oilers, Paul with the Beatles — but once that time ended they still succeeded elsewhere with the Kings and Wings, respectively.

When The Great One went to L.A., he added a Hart Trophy, three Art Ross Trophies, four Lady Byngs and helped the Kings reach the Stanley Cup final. Paul churned out Band on the Run, Live and Let Die, and Jet all post-Beatles. (Editor’s note: So how do you explain this?)

Lyric: “There are places I remember/All my life/Though some have changed/Some forever not for better/Some have gone and some remain.”

Mario came into the league with huge expectations, despite the massive the shadow being cast by No. 99. Even though he began filling the net from his very first shift, most hockey fans said he would never be as great as Gretzky.

Once he officially burst out of that shadow, the awards and Stanley Cups started piling up. Sound familiar? Imagine hit after hit being pumped out by Lennon/McCartney that are so good, you’re too intimidated to present your own songs to the band. Once George conquered that fear, we got tunes like While My Guitar Gently Weeps, Something, and Here Comes the Sun. He was the first Beatle to have a No. 1 hit after the band officially called it quits.

Lyric: “I look at the world and I notice it’s turning/While my guitar gently weeps”

Without the drummer keeping the beat and rhythm, a song just falls apart.

You could have the best collection of hockey players on earth, but if your goalie can’t keep you in the game, you’ll never win a Stanley Cup. That’s why I think Roy is the perfect Ringo. Both were in the back, watching their buddies do some amazing things, but they had to keep up their end of the bargain or it just wouldn’t work.

They also both had a pretty quirky sense of humour that seemed to overshadow just how good they were at times.

Lyric: “I get high with a little help from my friends”

Producer George Martin has been called the “fifth Beatle”, and with good reason.

Songs don’t just make themselves no matter how good the musicians are. The band — and the songs they create — need structure.

Sometimes getting that structure means being the most unpopular person in the room and making the tough decisions.  There is an old hockey joke I’m sure you have heard that says “You hated Scotty Bowman for 364 days of the year, and on the 365th you won the Stanley Cup.”

Exchange “Stanley Cup” for “hit record” and you see what I mean.

Lyric: “And in the end/The love you take is equal to the love you make.”

Pete Best was the Beatles drummer, but was fired right before they became the biggest band in history. Ouch!

Going into the 1971 draft, two players were at the top of the list: Guy Lafleur and Marcel Dionne. Both are French Canadians who would have loved the opportunity to play for the Habs (who had the #1 pick). Montreal passed on Dionne and went with Lafleur. The Flower won a couple Hart trophies and three scoring titles, to go along with his 5 cups.

Dionne had a Hall of Fame career, but may go down as the best player never to win a Cup.

Lyric: “And when the broken-hearted people living in the world agree/There will be an answer/Let it be.”

Imagine (see what I did there) your name forever being associated with something that only brings people sadness.
Yoko will forever be blamed for breaking up the Beatles, while Peter Puck will always be the guy who traded Gretzky.

You can argue the fairness of the venom that has been spewed in their direction (Yoko has been public enemy No. 1 for 50 years), but their legacies will never change.

Lyric: “When you talk about destruction/Don’t you know that you can count me out.”