Other than the Great One, there’s likely no one who will celebrate the 40th anniversary today more than Kevin Morrison of Sydney, N.S.

Morrison, then 27, was a 215-pound enforcer who played defence for the Indianapolis Racers when the teenager from Brantford, Ont., joined the World Hockey Association team.

Gretzky was known as a scoring phenom in the Ontario Hockey League and everyone had great expectations for him, Morrison recalled.

“He was brought in to save the Indianapolis Racers and to improve the WHA, and he showed up at our training camp, he was 161 pounds, and didn’t look like he could save himself let alone the league and the team,” Morrison said.

Gretzky was only 17 years old, but he was a great kid, Morrison said, adding it was a pleasure and an honour to play with him.

“I remember it right like it happened yesterday,” he said. “I picked the puck up behind the net. There was a guy chasing me. I went up the middle of the ice and I went in behind their net and I dished it out front to him.

“He was on his backhand and he put it top shelf. It was a momentous goal. I started him on his way.”

Morrison said Gretzky was already showing signs of thinking that way as a teenager. 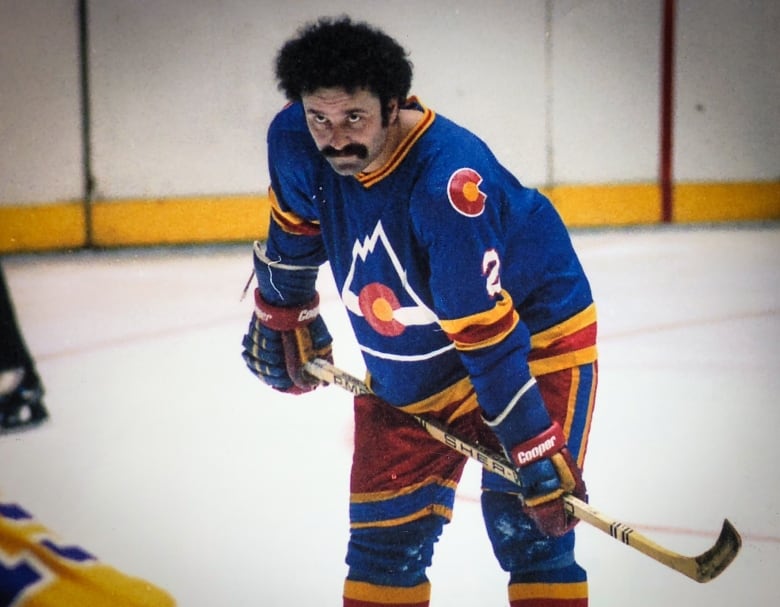 Morrison patrolled the blueline as an enforcer, but racked up solid offensive numbers over six seasons in the WHA and one in the NHL.

But as a “grizzled” veteran, Morrison didn’t immediately adjust his play.

“I put it right on his stick,” Morrison said. “I was old school. Always lead the man by a foot or two and then put it on his stick.

“But (Gretzky) was like that. He’d say, ‘If I have the puck here, you go there,’ and I’d go over there, skate around in a circle and the puck would be there.

“He was phenomenal. He had that peripheral vision and he knew what was going to happen before it happened.” 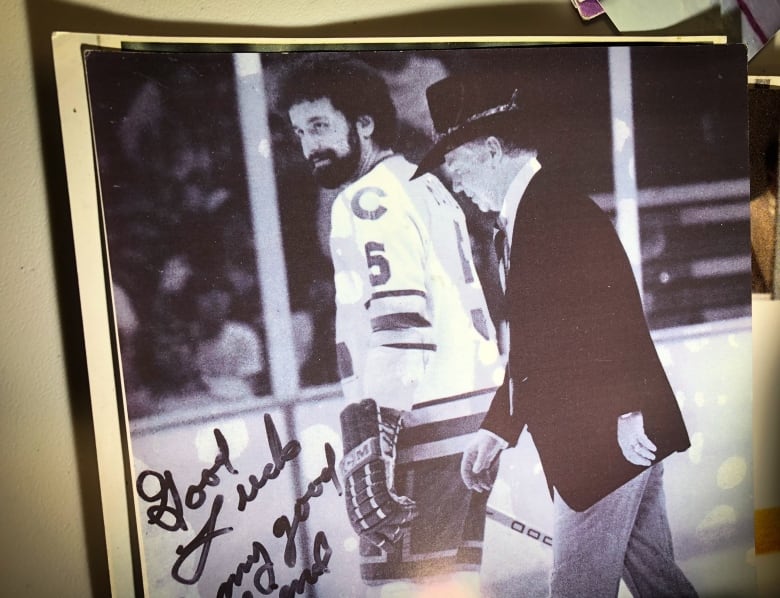 Morrison’s photo collection includes a signed picture of him exiting the ice with Don Cherry.

Morrison said the fans were happy for the goal — it put the Racers ahead of the Edmonton Oilers — but it was Gretzky who celebrated that goal the most.

“When he got his goal it was a big load off his back … because he signed a big contract when he came with us and he had a lot of pressure on a kid for 17 years old,” Morrison said.

“You couldn’t take the smile off his face for that night, and even the next day practice he was skating around with a big grin on and he couldn’t wait to get the next one.”

But the Indianapolis owner only kept Gretzky on the roster for eight games before trading him to Edmonton in an effort to keep the Racers afloat.

Gretzky jumped up and down after that first pro goal, but no one celebrated Morrison’s assist.

“It was just another goal at the time, and we were just doing our job,” he said.

Morrison was no slouch. As a 19-year-old in 1969, he was the first Nova Scotian drafted to the NHL.

In high school, he played for two Sydney Academy teams and a community team, and one night scored five goals and was spotted by a local who was also a scout for the New York Rangers. 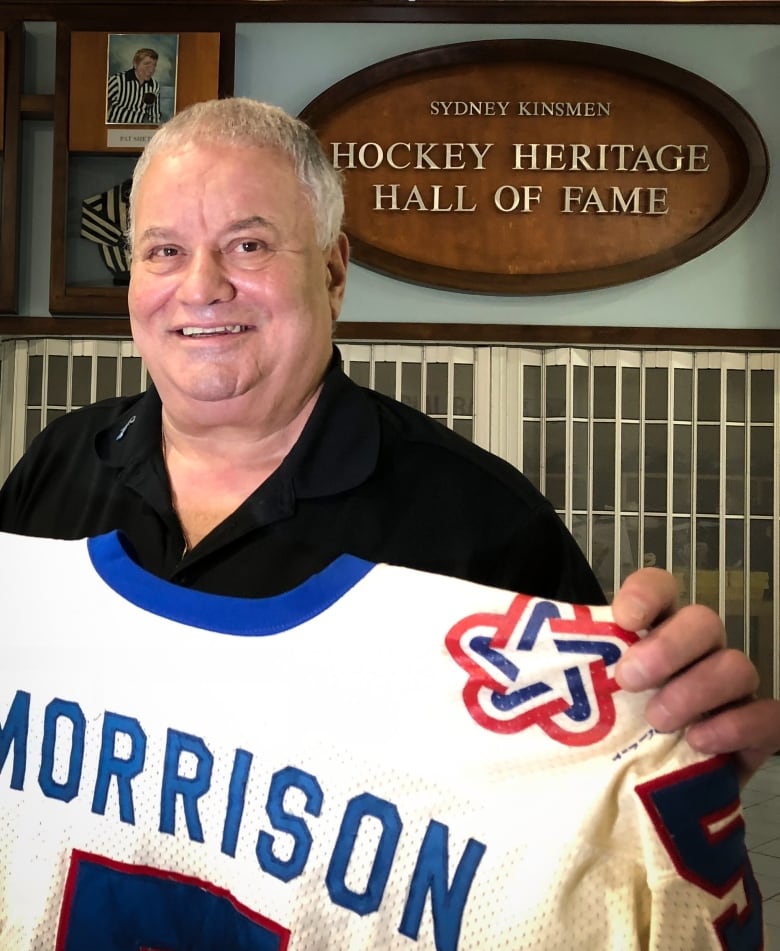 Morrison’s WHA record includes first defenceman with a hat trick, first to earn 20 goals in a season — a feat he managed three times — and he was named to several all-star teams. (Tom Ayers/CBC)

Morrison played junior hockey in Ontario and Quebec and then played several seasons in the Eastern, Central and American hockey leagues before joining the WHA.

In 80 games with Indianapolis, Morrison notched 17 goals and 42 assists.

He also played in three WHA playoff series with the San Diego Mariners, picking up two goals and 15 assists in 28 playoff games.

His WHA record includes being the first defenceman with a hat trick, the first to earn 20 goals in a season — a feat he managed three times — and being named to several all-star teams.

Morrison was the highest-scoring defenceman in the WHA, with 97 goals and 263 assists.

After six seasons in the WHA, the 30-year-old played 41 games with the Colorado Rockies under Don Cherry, earning four goals and 11 assists.

Morrison then spent eight years in Newfoundland senior hockey and has been named to the Newfoundland, Cape Breton and Nova Scotia sport halls of fame.

He also racked up plenty of penalty minutes, but Morrison has no regrets.

“I did a lot of fighting and I put up some points, and then I learned the rest of the game besides the fighting part of it and everything fell into place at the end of it,” he said. 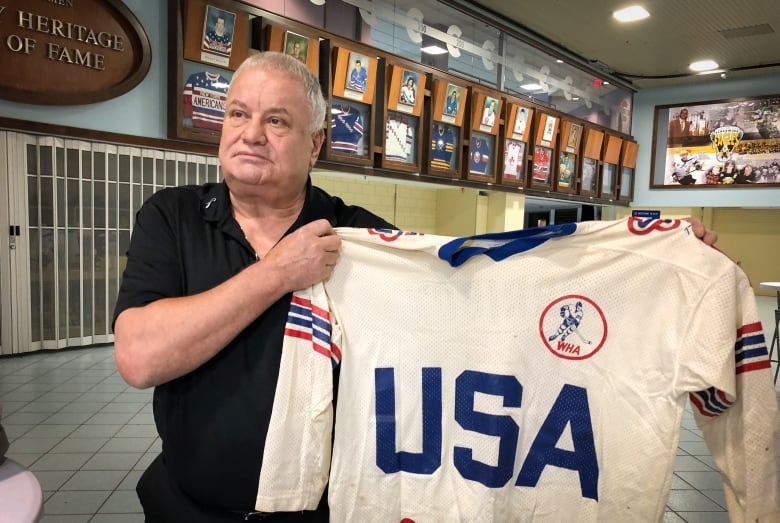 Morrison shows off his WHA all-star jersey in the concourse at Centre 200, where his game-worn jersey from the San Diego Mariners hangs. (Tom Ayers/CBC)

“I’ll have an Alexander Keith’s and toast the Great One from the not-so-great one,” he said with a laugh.