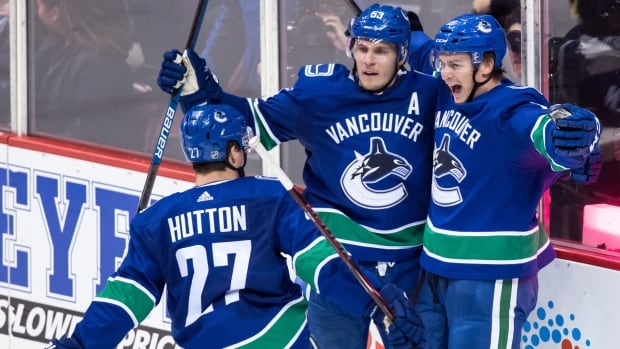 Jake Virtanen scored twice on Wednesday, leading the Vancouver Canucks to a 4-2 win over the Chicago Blackhawks.

It was the first two-goal game of the 22-year-old right winger’s career.

Brendan Gaunce and Antoine Roussel also scored for the Canucks (8-6-0).

Canucks goalie Jacob Markstrom stopped 24 of 26 shots and Corey Crawford turned away 24 of 28 for the Blackhawks.

Chicago was first on the scoreboard, with Saad scoring his third goal of the season midway through the first period.

The left winger beat Canucks defenceman Erik Gudbranson in Vancouver’s end and put a hard shot on net. Markstrom seemed to get a piece of it but the puck trickled in underneath him for the first goal of the night.

Virtanen responded for the Canucks in the 15th minute after the Blackhawks turned over the puck in the neutral zone.

He picked up speed on the breakaway and put a high shot in past Crawford.

The Blackhawks got back on top with a power-play goal early in the second frame after Canucks defenceman Michael Del Zotto took a cross-checking penalty late in the first.

HNIC Podcast: ‘I’ve had GMs threaten me,’ Elliotte Friedman on the life a hockey insider

In this week’s edition, the Hockey Night in Canada broadcaster talks about the ups and downs of breaking hockey news. 0:57

Toews fired a wrister from the top of the faceoff circle, sailing the puck in past Markstrom. He now has 299 goals for the Blackhawks — the sixth most in franchise history.

Chicago is 30th in the league on the power play. Wednesday was the sixth time this season that the Blackhawks have scored with the man advantage.

Virtanen followed with his second of the night just over 12 minutes into the second period. He scooped up a pass just inside the blue line and fired a quick shot past Crawford to tie the game once again.

Virtanen has five goals and two assists this season.

Gaunce notched the go-ahead goal halfway through the third period after he snatched up a Blackhawks’ pass.

The goal was the sixth of the centre’s NHL career, with the last one coming on Feb. 1.

He also registered an assist on Roussel’s late-game goal.

Wednesday marked Gaunce’s first game with the Canucks this season. He was called up from the American Hockey League Utica Comets on Tuesday to help fill out a roster that’s been riddled with injuries early in the season.

Another name may have been added to Vancouver’s injury list in the win.

Stecher went to the locker room after being looked at by a trainer on the ice.

The Canucks have one bout left in their four-game homestand. They’ll host the Colorado Avalanche on Friday.