James Neal had the puck on his stick and was staring at an open net. In a can’t-miss situation, that’s exactly what he did.

Poised to give the Vegas Golden Knights the opening goal in Game 4 of the Stanley Cup Final, the veteran leader of this upstart expansion team hit the right post . Ping! The puck skipped behind Capitals goaltender Braden Holtby and slithered harmlessly toward the back boards.

“You want those chances. Nine times out of 10 you probably put that in the back of the net,” Neal said. “I had the composure to wait. And then you shoot it and you’re like, `Oh!”‘

The Golden Knights, a team in desperate need of a boost of confidence, collectively shrugged as a golden opportunity slipped away.

“It definitely would have changed the outcome of the game and would have given us momentum,” said right wing Alex Tuch, who knows a thing or two about being coming up empty on a close-in shot.

James Neal’s nightmares are now just this on loop <a href=”https://t.co/nN1lymCfwm”>pic.twitter.com/nN1lymCfwm</a>

Not surprisingly, the Golden Knights sputtered the rest of the way Monday night in a 6-2 defeat that put them on the brink of elimination. Washington is up 3-1 and can win its first Stanley Cup on Thursday night in Las Vegas.

“Go home, win one game and the pressure is on them,” Neal said, hopefully.

Although the Capitals have blown many a playoff series in the past, only one team, the 1942 Detroit Red Wings, has lost the Stanley Cup Final after holding a 3-1 lead.

“Not where we want to be, that’s for sure,” Vegas goaltender Marc-Andre Fleury said. “But we have a good bunch of guys with a lot of character in the room. Nobody’s quitting.”

Barring a comeback of historic proportions — an unlikely occurrence after being outscored 12-5 over the past three games — the Golden Knights will always remember this series for “The Stick” and “The Post.”

“The Stick” was wielded by Holtby , who used it late in Game 2 to snuff a seemingly sure goal by Tuch in a 3-2 Washington victory. “The Post” is a symbol of the frustration Vegas has experienced in this series after winning 12 of 15 in roaring to the Western Conference title. 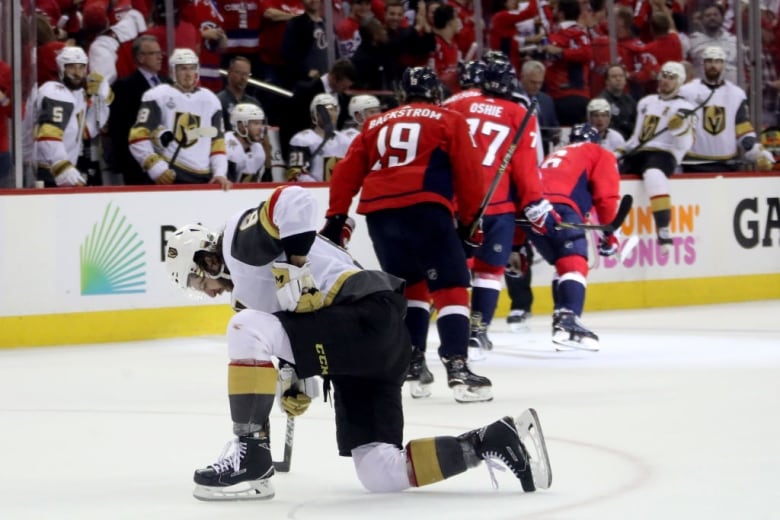 Who knows if things would have been different on Monday night if Neal put the puck in the net?

This much is certain: The reeling Golden Knights were looking for something, anything, to build on when they entered Game 4, and a 1-0 lead would have been splendid. Presented with a power play in a scoreless first period, Vegas worked the puck around smartly in the Washington zone. Then, Erik Haula whisked a cross-ice pass to Neal on the left side of the net, and Holtby was slow to react.

“We obviously got some breaks at the start of the game,” the goaltender said. “Honestly, I thought it was in. Somehow, it didn’t go in.”

Said Neal: “It’s not like anyone made a save. I shot it off the post on the far side. It’s done with. It’s not the first time it’s happened. Probably won’t be the last. But at this stage, at that moment, it changes the game.”

The Capitals rattled off three straight goals before the period ended to take full control.

‘Can’t feel sorry for yourself’

Game over. On to the next one for the Golden Knights, who face elimination for the first time during the playoffs.

“You can’t feel sorry for yourself. You’ve got to win a game at home,” Neal said. “That’s what we’ll focus on. I like the way we played. You’ve got to take the positives.”

Coach Gerard Gallant insisted: “Tonight’s game was a step forward. Obviously, though, we have no more room for error.”

The Golden Knights could use a little luck. Tuch and Brayden McNabb both lined shots off the post after Neal, who scored with just under 16 minutes left to make it 4-1.

But the outcome by then was all but decided.

The Golden Knights have struggled to generate offense against the tenacious Washington defense, and Fleury has not been as sharp as he was in Vegas’ three previous series. He gave up six goals on 23 shots as Vegas dropped its third straight game.

“Obviously, when you’re a goalie, you don’t want to get scored on,” Fleury said. “There was a lot of that tonight. It’s never a good feeling.”