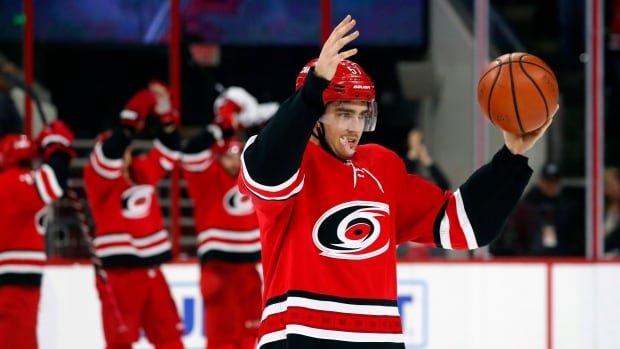 The “Storm Surge” is coming to an end in Carolina.

Hurricanes forward Justin Williams posted on Twitter that the NHL club will be ending its elaborate post-game celebrations — which were popular with fans but spurred “Coach’s Corner” star Don Cherry to call the Hurricanes a “bunch of jerks” — as they prepare for their final playoff push.

Carolina entered its game against visiting Washington on Thursday holding down the top wild-card playoff spot in the Eastern Conference by one point over the Montreal Canadiens.

“Regardless of the outcome tonight, this will be our last ‘Storm Surge’ of the season,” Williams said. “It has been an absolute treat celebrating victories with our fans and muddying up the waters a little bit.

“We’ve created a buzz again in Carolina but we know ultimately we’ve done that by winning games and playing for each other. Huge games are coming up for us.”

Regardless of the outcome tonight, this will be our last storm surge of the season. It has been an absolute treat celebrating victories with our <a href=”https://twitter.com/NHLCanes?ref_src=twsrc%5Etfw”>@NHLCanes</a> fans and muddying up the waters a little bit. We’ve created a buzz again in Carolina but we know ultimately we’ve done that

Carolina’s post-victory parties have gone viral on social media. The celebrations take many forms, with players jumping into the glass, paddling imaginary kayaks, playing games of ‘Duck Duck Goose,’ and even running a limbo line.

After their win 5-1 win over the Wild, the Hurricanes busted out the basketball net to do their best March Madness impression. It was Trevor van Riemsdyk who would put a stamp on a big victory, soaring in for a one-handed jam. 1:06

Along with the Hurricanes’ playoff possibilities, the “Storm Surge” created buzz in a hockey market that desperately needed a jolt. The team plays in the North Carolina capital of Raleigh, which is not a traditional hockey market. And buzz around the team had dissipated since the Hurricanes followed their 2006 Stanley Cup with a series of mediocre results, including missing the playoffs for the past nine seasons.

While fans enjoyed the imaginative celebrations, they did not sit well with Cherry, a known hockey traditionalist.

After Carolina beat Pittsburgh 3-2 in a shootout, they pay homage to the classic video game ‘Duck Hunt’. 1:02

“This is a joke,” Cherry said on an episode of “Coach’s Corner.” “Young men expressing themselves for joy and winning. You don’t do this in professional hockey. What are these guys, jerks or something?

“That is absolutely ridiculous, they’re jerks doing it … You never do anything like that, they’re still not drawing [fans] and they’re a bunch of jerks as far as I’m concerned.”

The Hurricanes responded by designing “Bunch of Jerks” t-shirts with the team logo.