Manitoba’s Jermaine Loewen is the first Jamaican-born player to be drafted to the NHL, but his story was inspiring long before his name was called.

“It was a dream come true,” Jermaine, 20, says of the June 16 draft in Dallas, where he was selected 199th overall by the hometown Stars.

“When I got the call, it was really emotional for me. I cried on the phone, just because of all the things that I’ve gone through in my life.”

His birth parents abandoned him when he was just one year old. He was sent to live in an orphanage in the city of May Pen.

He says the staff did their best to feed and care for them, but he remembers intense competition between the children for limited resources.

“That was hard. Every day at the children’s home was like a fight to survive,” he says.

“But one thing I chose was to love in spite of all the things that people did to me, and even to this day, all the memories that come back, I just really try to forgive every day.” 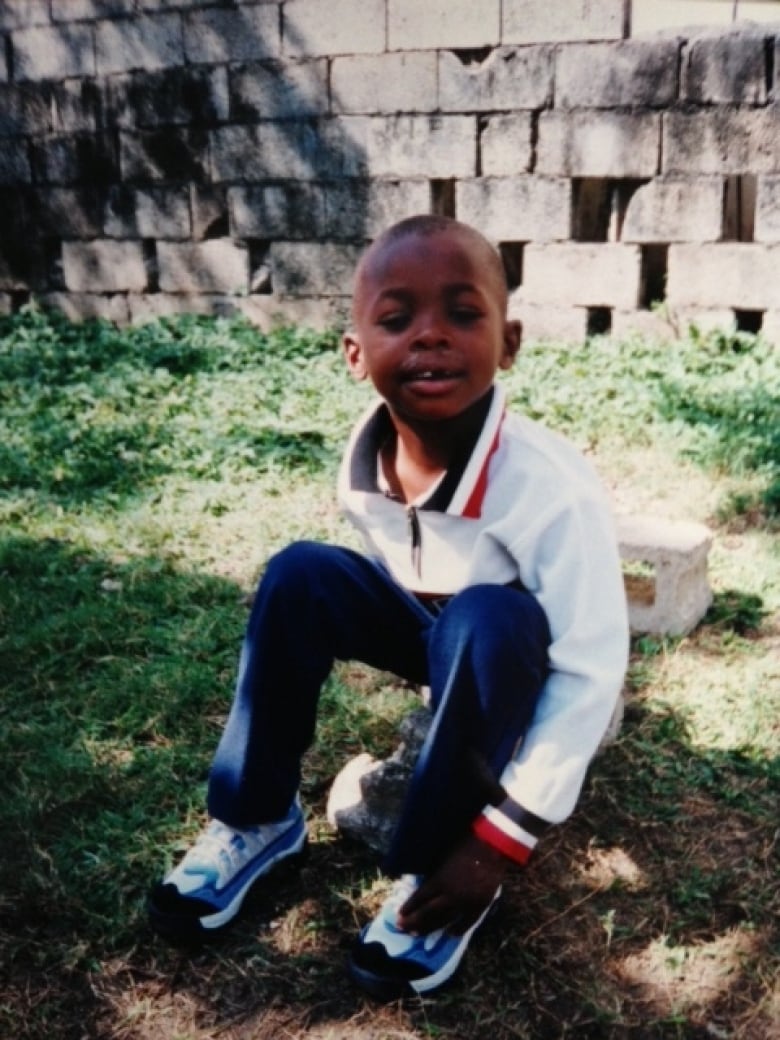 This is the first photo Stan and Tara Loewen saw of Jermaine. It was part of a Christian group’s child sponsorship ad. (Tara Loewen)

In 2001, Stan and Tara Loewen travelled with a Christian group doing short-term ministry and volunteer work in Jamaica.

Before they left Canada, they saw a picture of a young boy in one of the organization’s child sponsorship ads. Stan joked about bringing him home. That boy was three-year-old Jermaine.

Shortly after they arrived in Jamaica, they met Jermaine at the orphanage and fell in love with him. By the end of their three-week trip, they knew they had to adopt him.

“There was something really special about Jermaine from the beginning. He just looked like he needed a family,” Tara says.

“My heart melted,” Jermaine adds. “I didn’t know what parents were really, up until that point.” 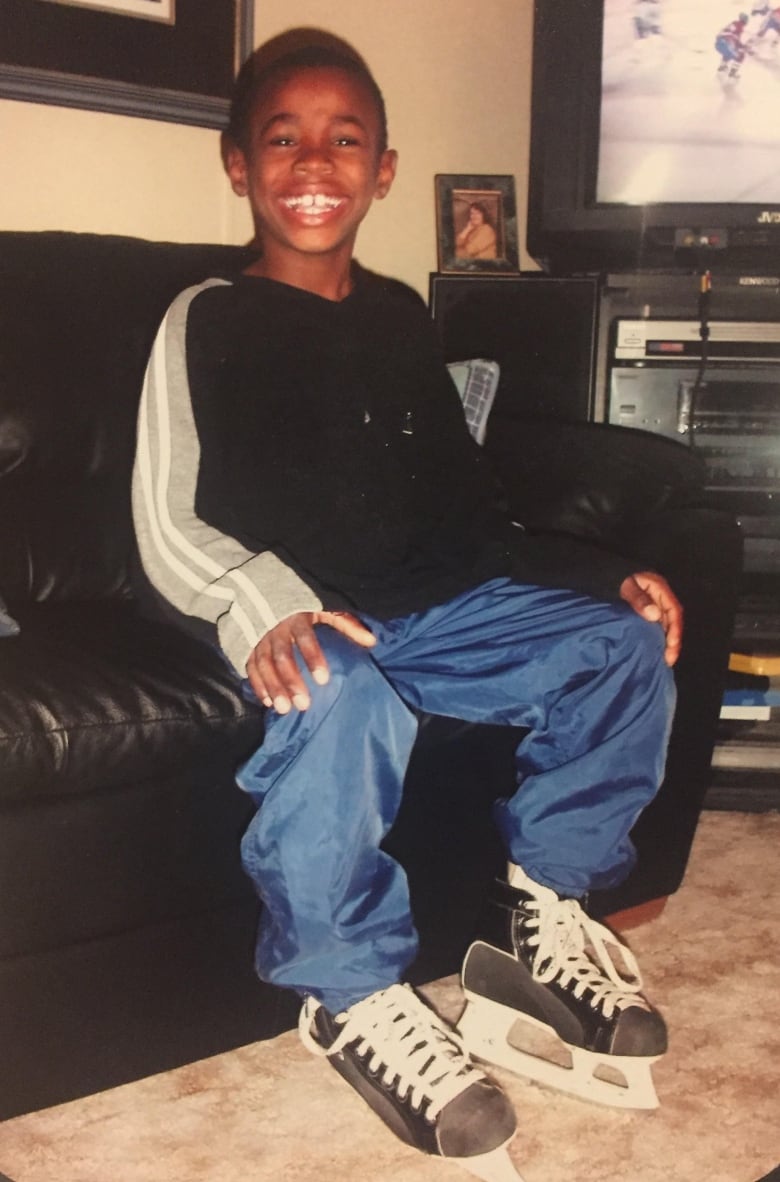 Jermaine Loewen says he was initially disappointed to get skates for Christmas when he was six. He was hoping for a Tonka truck. But he soon grew to love hockey. (Tara Loewen)

It took 21 months to wade through all the paperwork, rules and regulations before the Loewens could return to Jamaica to pick up their son and bring him home to rural Manitoba.

“I just think how scary that must have been for him,” Tara says. “There was so much change. He was so brave. His resiliency and courage was obvious even back then … That perseverance and resiliency has really helped him in hockey as well.”

Jermaine got his first pair of skates as a Christmas gift when he was six.

“I was like, ‘Mom and dad, come on!’ I cried. They tried to console me, and they were like, ‘It’s going to be OK.’ Hockey skates. I was expecting to get a Tonka truck.”

When he was eight, he took skating lessons at a learn-to-skate program meant for three- and four-year-olds. His parents describe his technique as “baby giraffe.”

Jermaine Loewen is the first Jamaican-born player to be drafted to the NHL, but his story was inspiring long before his name was called. 3:42

“We were going to try it for one year and then after that, I just kind of fell in love with the game,” he says.

He was a quick learner and soon worked his way up to the AAA level.

His career with the B.C. squad has had its ups and downs. He went without a single point as a rookie and didn’t score his first goal until his 48th game. 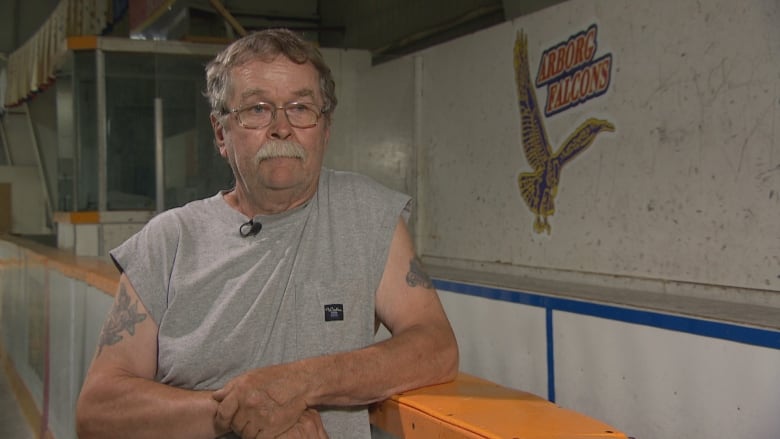 Chet Wyka, facility manager at the arena in Arborg, Man., says Jermaine Loewen was clumsy when he first started playing hockey, but quickly learned the skills and how to use his size to his advantage. Wyka says the whole community is proud of him. (Jaison Empson/ CBC News)

Canadian businessman Tom Gaglardi, who owns both the Blazers and Dallas Stars, watched Jermaine’s game improve over the past four years.

He says Jermaine’s selection by the Stars in the seventh round is a “great story” that shows anybody can accomplish anything they put their mind to.

“He started at such a late age,” he says. “It’s an unheard-of age to start hockey at. He’s just an incredibly gifted athlete. He’s incredibly driven. He’s one of the nicest guys and nicest teammates one could have, so he’s earned it.”

In Arborg, population 1,252, people are thrilled for him.

“For a small community, it’s got our name on the map again,” says Chet Wyka, facility manager at the arena.

Wyka points out Florida Panthers goalie James Reimer is also from the area. In fact, the two hockey players both attended Morweena Christian High School and their families are good friends. 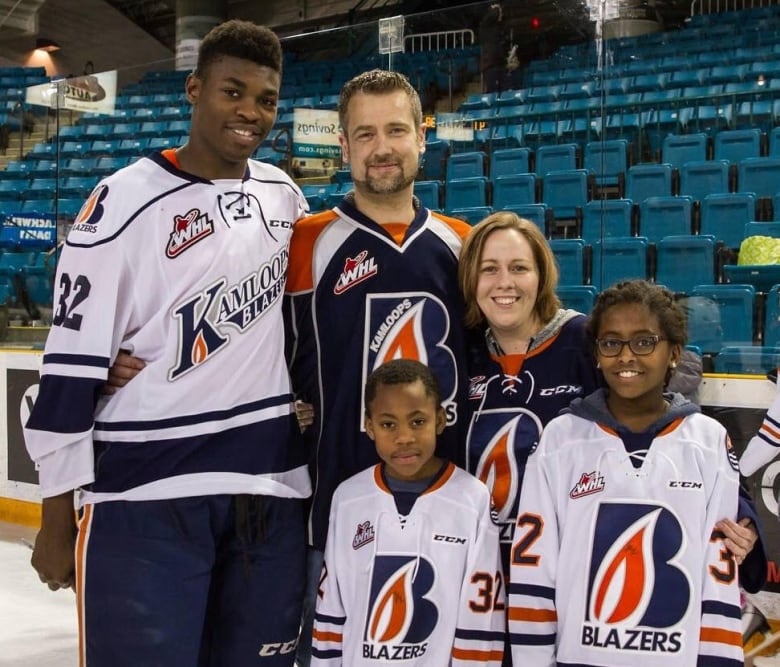 Jermaine Loewen’s family doesn’t get out to see as many of his games as they’d like, but would love to see him play in his first NHL game. (Tara Loewen)

The town is proudly behind him, but Jermaine’s family members remain his biggest fans.

“He did really good and I will keep hoping that he will do his dream,” says his 11-year-old sister, Makeda, who was adopted from Ethiopia.

Nathaneal, 9, also adopted from Jamaica, says he looks up to his older brother, and hopes he’ll come home soon for a game of mini sticks.

“When you realize where he came from,” father Stan says of Jermaine, “the loss he experienced in his life … the things he’s had to work through in his life, to go from that to this moment, it’s kind of like, ‘Wow!'”

Jermaine’s mother, Tara, agrees: “We see God’s fingerprints all over his life and his journey … It’s been like miracle after miracle from that very first time we met him.”

There’s no guarantee Jermaine will ever play a single NHL game.

But he’s making the most of this opportunity to show the Stars what he can do.

“I don’t take a day for granted,” he says from the team’s development camp in Texas. “Listen to instruction to the best of my abilities and just be a person that people want to be around.”