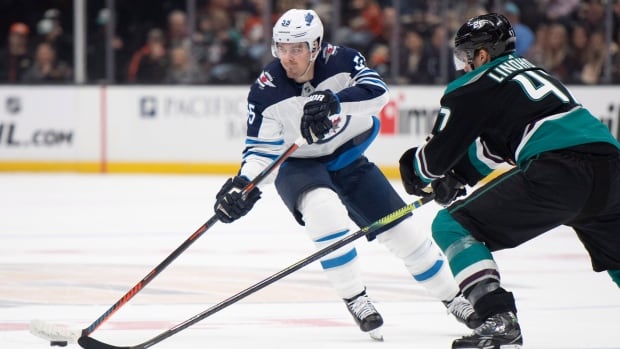 Connor Hellebuyck made 29 saves in his first shutout of the season, and Kyle Connor had a goal and an assist in the Winnipeg Jets’ fourth straight victory, 3-0 over the Anaheim Ducks on Wednesday night.

Mark Scheifele scored a power-play goal in the first period and Nikolaj Ehlers added a goal for the Jets, who extended their lead atop the Central Division to three points over Nashville. Jacob Trouba had two assists as the Jets completed a Southern California sweep and moved into position to clinch a playoff berth as early as Thursday in Vegas.

John Gibson stopped 20 shots for the Ducks, who were shut out for the seventh time in 2019.

Anaheim had won six of nine in a late-season surge before getting shut down by Hellebuyck in his 13th career shutout, but his first in 55 appearances this year. Laurent Brossoit was in net for the Jets’ sole previous shutout victory of their 44-win season.

Winnipeg (44-25-4) has 92 points and a game in hand on Nashville (42-27-5). The Predators have eight games left to make up the deficit, or the Jets will win their first division title since relocating from Atlanta.

Winnipeg is headed to the playoffs for the second straight season after making it just once — and then getting swept by a powerhouse Ducks team — in the franchise’s first six seasons up north.

The Ducks would need an extraordinary late surge to avoid missing the playoffs for the first time in seven years and just the third time since the 2004-05 lockout.

The Jets scored a franchise-record six goals in the first period of that Ducks demolition in Winnipeg last month, but Scheifele got their only goal of the opening period in this rematch, converting a feed from Connor for his team-leading 35th goal of the season.

After a scoreless second, Connor extended the Jets’ lead when he deflected Tyler Myers’ shot for his 29th goal.

Ehlers added his 19th goal shortly afterward when Gibson failed to cover the near post and allowed a stoppable shot to slip through.