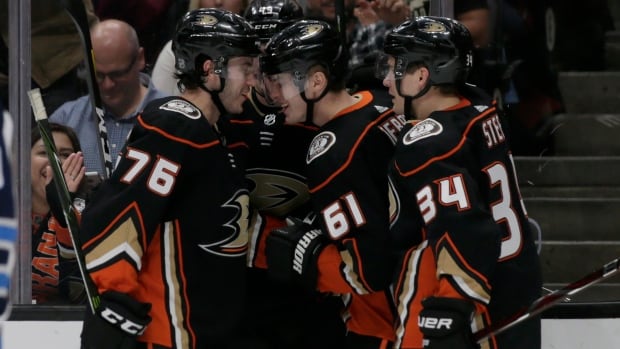 Cam Fowler set a franchise record for career goals by an Anaheim Ducks defenceman in their 7-4 win over the Winnipeg Jets on Tuesday night.

John Gibson made 36 saves and Josh Mahura tied an Anaheim rookie mark with three assists as the Ducks broke a four-game losing streak to the Jets.

Nikolaj Ehlers scored twice for the Jets, who have lost five of seven. Connor Hellebuyck was pulled midway through the second period after allowing five goals on 19 shots, and Laurent Brossoit made seven saves in relief.

Fowler tied it 1-all at 10:01 of the first period, scoring his 61st goal to pass Scott Niedermayer for the team lead among defencemen. Fowler, who did it in 634 games, scored on a wrist shot from the right circle following a quick breakout by the Ducks from their own zone.

Niedermayer scored 60 goals in 317 games during five seasons with the Ducks.

Troy Terry gave Anaheim a 4-3 lead eight minutes into the second when he scored on a breakaway set up by Mahura’s long pass. Derek Grant made it 5-3 at 9:10 when the rebound of a shot by Nicolas Deslauriers struck him in the arm and redirected in.

Grant’s second goal of the season capped a frantic 2:52 in which four goals were scored. Adam Henrique put the Ducks up 3-2 at 6:18, but Ehlers tied the game 42 seconds later.

The Ducks tied it 2-all only 38 seconds into the second when Ryan Getzlaf scored off a faceoff win by Max Comtois.

Bryan Little pulled the Jets to 5-4 at 6:39 of the third period, but Carter Rowney scored on a breakaway with 3:48 remaining to make it 6-4. Rowney added an empty-netter with 2.9 seconds remaining.

The Jets needed 55 seconds to take a 1-0 lead when Ehlers scored on a wrist shot from the right circle, and Blake Wheeler put Winnipeg back in front 2-1 at 12:02 after Fowler’s record-breaking goal.