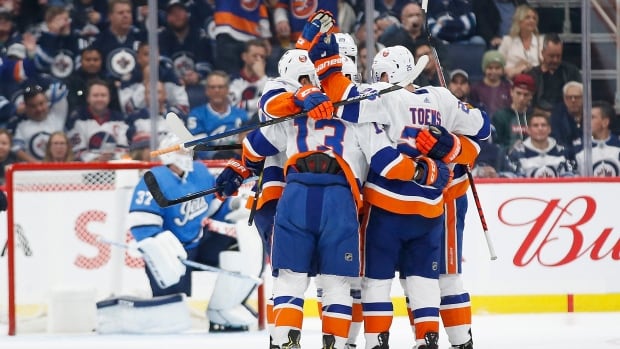 Mathew Barzal scored twice as the New York Islanders won their third straight game with a 3-1 victory over the Winnipeg Jets on Thursday.

Nikolaj Ehlers had the lone goal for Winnipeg (4-5-0), which has lost three straight.

Connor Hellebuyck made 23 saves for the Jets in the third game of a five-game homestand at Bell MTS Place.

Semyon Varlamov stopped 32 shots for the Islanders (4-3-0), who had won their last two games in overtime and a shootout.

“I feel like Kylie Jenner right now” – Mat Barzal after taking a few high sticks in the second period <a href=”https://t.co/mpzkHsPTv6″>pic.twitter.com/mpzkHsPTv6</a>

Josh Bailey scored into an empty net with 27 seconds left in the third period.

Barzal scored the go-ahead goal with 17 seconds remaining in the second period.

The Jets had outshot the visitors 16-5 in the first period, had a pair of power plays and led 1-0.

Ehlers scored with 16 seconds left in a tripping penalty to Islanders defenceman Adam Pelech, a high shot that went over Varlamov’s glove at 13:12.

The Jets have scored at least one power-play goal in four straight games.

The Islanders didn’t get their sixth shot of the game until 7:41 of the second period and it was a power-play goal by Barzal to tie it 1-1 just 16 seconds after Dmitry Kulikov went to the penalty box for tripping.

Hellebuyck made four great stops in the middle period, but a Winnipeg turnover led to Barzal’s second goal on a two-on-one with Anders Lee at 19:43. Shots on goal were 24-17 for Winnipeg.

It was Barzal’s third goal of the season and moved his point streak to three games with a trio of goals and two assists in that span.

The Jets pulled Hellebuyck for the extra attacker with about two minutes left in the third. Varlamov stopped a couple shots, including one by Patrik Laine through traffic.

Winnipeg hosts the Edmonton Oilers Sunday. The Islanders travel to Ohio for a Saturday game against the Columbus Blue Jackets.

This report by The Canadian Press was first published Oct. 17, 2019.