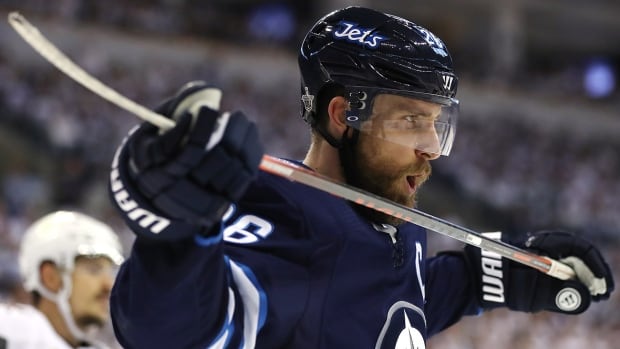 The Winnipeg Jets want top scorer Blake Wheeler around for a while to help build on their franchise-best 114-point season.

Forward Blake Wheeler, coming off a career-high 91-point campaign, has agreed to a five-year contract extension worth $41.25 million US.

An NHL all-star for the first time in 2017-18, the 33-year-old finished ninth in NHL scoring, tying for first in assists (68) with Philadelphia’s Claude Giroux, but leading with 48 primary helpers.

Wheeler’s regular season also included 40 power-play points (up 19 from his previous high in 2017-18) and 20 minutes 15 seconds of ice time, the highest average of his 10-year NHL career.

Wheeler also reached at least 20 goals for the fifth straight season and sixth time in his career while leading Winnipeg and standing fifth in the league with 21 points in 17 playoff contests.

The native of Robbinsdale, Minn., was a finalist for the Mark Messier Leadership Award, presented to the NHL player that exemplifies great leadership qualities to his team on and off the ice during the regular season while taking a leading role in his community growing the game.