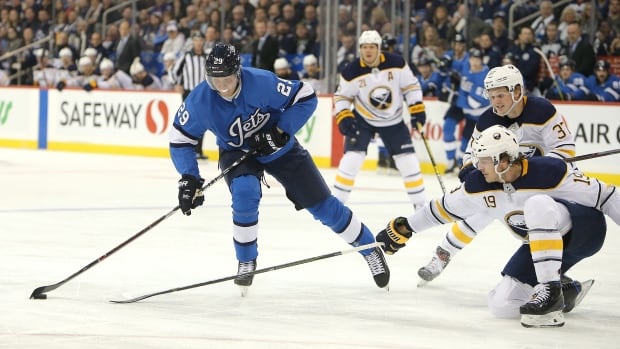 Conor Sheary scored in the seventh round of the shootout as the Buffalo Sabres edged the Winnipeg Jets 2-1 on Friday for their fourth straight victory.

Sheary beat Jets netminder Laurent Brossoit with a high shot over his glove.

Kyle Connor scored his ninth goal for the Jets (11-5-2) in the second period. He has three goals and two assists in his past four games.

Jeff Skinner tied the game 1-1 early in the third period on the power play for the Sabres (11-6-2), extending his goal-scoring streak to four games with his 14th of the season. He has five goals in that span.

Carter Hutton stopped 25 shots for Buffalo as Brossoit made 31 saves in his fourth start (3-0-1) of the season.

The Jets outshot the visitors 12-4 in the first period, which featured a few solid saves from both netminders.

After the Jets applied a stretch of pressure in Buffalo’s end that included Dustin Byfuglien ringing a shot off the post, Connor scored on a 2-on-1 with Patrik Laine at 7:10 of the second. Laine later forced a turnover near Buffalo’s net, but his shot went off the post.

Later in the period, Brossoit made a near-costly move when he came out to play a loose puck and swiped it into the outside of his goal post.

The Sabres went on a power play with 19 seconds left in the second period after Jets forward Brandon Tanev was called for holding. They capitalized 53 seconds in the third when a rebound bounced around a scramble in the crease and Skinner shovelled in a backhand past Brossoit.

Hutton stopped a Laine wrist shot with five minutes remaining in regulation and a puck that went behind him in the dying seconds didn’t cross the line.

Connor challenged Hutton with a close shot in overtime, but the netminder denied him. Jack Eichel went in alone on Brossoit, but Brossoit turned aside the shot.