Zach Parise scored twice in his return from a four-game injury absence as the host Minnesota Wild completed a five-game season sweep of the Winnipeg Jets with a 5-1 victory on Tuesday in Saint Paul, Minn.

Minnesota can be eliminated from playoff contention should Colorado defeat Edmonton later on Tuesday.

Minnesota’s Devan Dubnyk, who made 32 saves on Tuesday, has turned aside 104 of 110 shots en route to defeating Winnipeg four times this season.

Defenseman Jacob Trouba scored a short-handed goal and Eric Comrie had 23 saves while making his fifth career start for the Jets (46-30-4, 96), who have dropped four of their last five games. Winnipeg resides even in points atop the Central Division with Nashville (45-29-6), which posted a 3-2 win over Buffalo on Tuesday.

After missing four games with a lower-body injury, Parise scored twice in just over three minutes midway into the first period to record his first multi-goal performance of the season and 48th career.

Parise chipped defenseman Greg Pateryn’s centering feed high into the air and off the back of Comrie before the puck settled into the net to open the scoring at 9:04.

Parise boosted his team-leading total in goals (28) and points (61) with a wrist shot from the slot to double the advantage at 12:16. 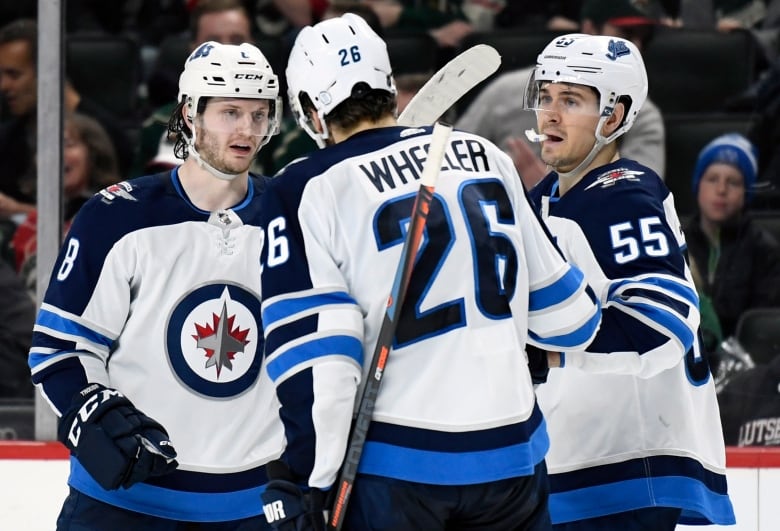 Rask’s sharp-angle bid from just above the goal line handcuffed Comrie to give Minnesota a 3-0 lead with 1:52 remaining in the first period.

Eriksson Ek continued the onslaught by beating Comrie from between the circles midway into the second before Trouba’s backhander shot from in close trimmed Winnipeg’s deficit to 4-1 with 3:47 remaining in the period.

Jets captain Blake Wheeler notched an assist on Trouba’s goal to boost his team-leading point total to 90, which is one shy of his career high set last season.