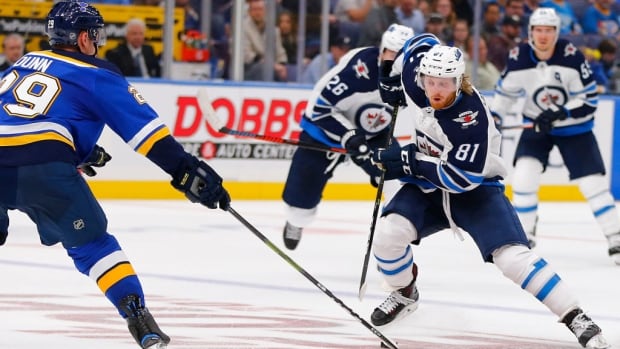 Patrik Laine, Blake Wheeler and Kyle Connor each had a goal and an assist, and the Winnipeg Jets beat the St. Louis Blues 5-1 on Thursday night.

Adam Lowry and Brandon Tanev also scored and Mark Scheifele had a pair of assists as the Jets won their fifth season opener in six years. Connor Hellebuyck made 41 saves and improved to 5-2 against St. Louis in his career.

Lowry’s unassisted short-handed goal at 5:51 of the third began a Winnipeg three-goal outburst in a span of 1 minute, 44 seconds to put away the game. Lowry’s breakaway came moments after Hellebuyck stoned Alexander Steen on a power-play chance.

Wheeler scored 64 seconds later and Connor tipped one past Jake Allen at 7:35 to complete the flurry.

The Jets have won nine of their last 11 against the Blues and have outscored St. Louis 32-18 during that span.

Vince Dunn scored late in the third period and Allen made 20 saves as the Blues lost their season opener for the first time in four years.

Laine gave the Jets a 1-0 lead four minutes into the game with a power-play goal that deflected off of Blues defenceman Colton Parayko and past Allen.

Hellebuyck made 22 saves in the first two periods, including a big blocker save on Ryan O’Reilly’s power-play chance late in the second, and got help from his post twice in the first.