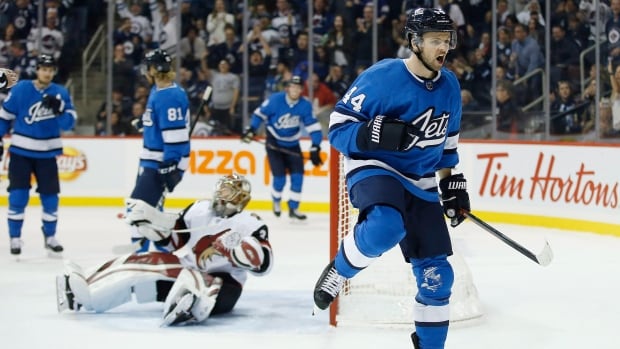 Three Jets scored their first goals of the season and defenceman Jacob Trouba contributed a trio of assists as Winnipeg defeated the Arizona Coyotes 5-3 on Saturday.

Tyler Myers, Josh Morrissey and Mathieu Perreault each recorded their first goals. Adam Lowry put in his fourth of the season and Blake Wheeler added an empty-netter. Morrissey and Myers also had an assist each and Kyle Connor had two helpers.

Making his second start of the season for the Jets (5-2-1), backup goalie Laurent Brossoit stopped 40 shots for his second victory.

Antti Raanta made 27 saves for the Coyotes, who haven’t won in Winnipeg since the Jets returned to Manitoba in 2011 (0-10).

The game was tied 1-1 after the first period and Winnipeg led 3-1 after two.

The Coyotes were outshooting the Jets 13-2 in the first period with nothing to show for it until Fischer took a pass from Ekman-Larsson and moved the puck around the front of Brossoit before flipping it into the net at 15:37. Winnipeg had two shots on goal at that point.

The Jets went almost 14 minutes between their second and third shots, but made a late one count when Morrissey fired the puck from the point and it hit Lowry’s blade and went in with 44 seconds left in the period.

Arizona had a 16-6 shot advantage in the opening period and went 0 for 2 on the power play.

Winnipeg got its first power play of the game midway through the second and peppered Raanta with six shots, but the netminder turned them aside.

After making a couple more big saves, Raanta couldn’t stop Myers’ high shot that made it 2-1 at 14:28 of the second. Myers had time to move to the net after Trouba drew two Coyotes toward himself.

On Winnipeg’s second power play, Mark Scheifele sent Morrissey a pass to the high slot and he bent down low and fired the puck in for the 3-1 lead.

Keller made it 3-2 at 3:50 of the third, but Winnipeg responded with Perreault’s goal less than two minutes later. A coach’s challenge for goaltender interference on Perreault’s marker was unsuccessful.

Keller netted his second of the game with a shot under the crossbar on Brossoit’s stick side for a 4-3 score at 11:53.

Arizona had a power play with just over five minutes remaining when Wheeler was penalized for slashing, but Brossoit snapped out his glove to stop a Keller shot. Wheeler then scored with 42 seconds left.