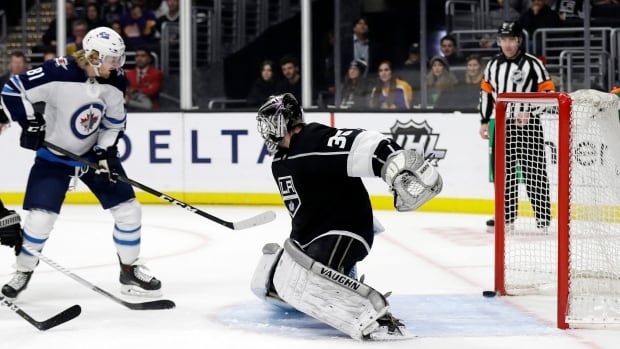 Kyle Connor had a goal and an assist and the visiting Winnipeg Jets extended their lead in the Central Division with a 3-2 win against the Los Angeles Kings on Monday night.

Kevin Hayes and Tyler Myers also scored and Laurent Brossoit made 15 saves for the Jets, who moved three points in front of the Nashville Predators with 10 games left.

Winnipeg and Nashville had been separated by no more than a point at the end of each day since Feb. 19.

Sean Walker and Dustin Brown scored for the Kings and Jack Campbell made 25 saves.

Myers gave the Jets a 3-2 lead with an unassisted goal at 16:50 of the second period.

The 6-foot-8 defenceman went end-to-end with the puck and scored into the top right corner after teammate Patrik Laine came out of the penalty box to form a 2-on-1.

After the Kings gave up the first two goals of the game for the 22nd time this season, they came back to tie the game 2-2 at 10:21 of the second period. Brown’s shot from the left circle got under Brossoit’s glove and above his left pad for his 19th goal of the season.

Hayes and Connor scored 1:05 apart in the first period for the 2-0 lead.

Connor brought the puck down the left side and behind the Los Angeles net before trying a wraparound. The puck slid through the crease and Hayes got to it before Campbell, lifting it into the net for a 1-0 lead at 11:32.

The Jets went on the power play 22 seconds later and Campbell made a save on Jacob Trouba’s slap shot through traffic, followed by another on Connor’s rebound try, but Connor lifted his second shot into the net for a 2-0 lead at 12:37.

Walker made it 2-1 at 14:53 of the first period when he received a pass from behind the net and scored through traffic from just above the right circle.