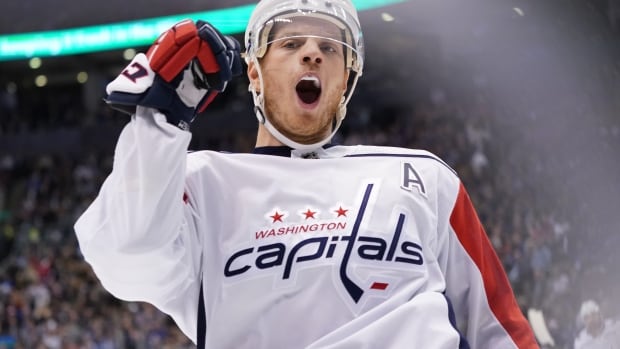 Todd Reirden has crossed paths with some great defencemen in his day.

The head coach of the Washington Capitals played alongside Chris Pronger in St. Louis and worked with Kris Letang as an assistant in Pittsburgh.

Reirden watched Pronger — a future Hall of Famer — intently during their two seasons together, hoping to one day use what he learned to tutor blue-liners with similar talent.

That started with Letang and, since 2014, has continued in Washington with John Carlson.

“They’re both good players, so that’s given me a real fighting chance,” Reirden, who played 188 NHL games in a professional career that stretched from 1994 to 2007, said with a smile. “Sometimes you get fortunate.”

The Capitals have certainly been fortunate to have Carlson this season.

The 29-year-old had an October to remember with seven goals and 16 assists for 23 points in 14 games — just two short of the NHL record for the most points by a defenceman in the first month of a season, set by Al MacInnis in 13 contests back in 1990.

Carlson scored twice in his team’s 4-3 overtime victory against Toronto on Tuesday to establish a franchise record for the most points by a blue-liner in a calendar month, surpassing Sergei Gonchar’s previous high of 22.

But despite the gaudy numbers, he isn’t getting ahead of himself, even as Norris Trophy buzz — Washington captain Alex Ovechkin referred to his teammate as “John Norris” recently — has started to bubble.

“This is a humbling game, always,” Carlson said. “If you think you played a good game, you still watch the tape and you made six mistakes, which is still an amazing game.

“There’s always room to get better.”

WATCH | Capitals down Leafs in OT:

Reirden said, similar to Letang, he’s talked with Carlson about setting goals that go beyond the game-to-game, month-to-month and even year-to-year.

“[Letang and Carlson] have really taken to that and used that to challenge themselves internally,” said Reirden, who got the Capitals’ top job when Barry Trotz didn’t return after winning Washington’s first Stanley Cup in 2018. “Both have grown not just as hockey players, but as people … which is pretty awesome to see.”

Carlson, who will never be mistaken for some of his more flashy contemporaries, sat third in NHL scoring heading into Wednesday with an average of 25 minutes 46 seconds of ice time — good for No. 3 in the league.

He’s been asked to look for more offence this season, often staying in the zone longer than in years past while still getting matched against other teams’ top lines.

Carlson’s shooting percentage is more than triple his career average (20 compared to 5.8) since debuting in 2009-10 and will no doubt regress over time, but his value goes far beyond what appears on the stat sheet.

Washington waved goodbye to veteran defencemen Matt Niskanen and Brooks Orpik in the off-season, leaving an experience void on the back end.

“His leadership responsibilities are totally different,” said Reirden, whose team sits atop the overall standings at 9-2-3. “We decided to give him the ‘A’ on his jersey. He’s done an excellent job with our young defencemen. That’s something that’s a little bit underrated about him. Those are things you don’t see.

“That’s been the exciting part for me — to watch him continue to grow that way as a leader. We all see the numbers and [the] special company he’s in, but he’s done an excellent job with our team as a leader.”

It’s not like Carlson, whose future with the Capitals was up in the air after the Cup win because of salary cap concerns, has come out of nowhere. The Natick, Mass., native had 90 goals and 403 points in 688 games coming into this season, including 70- and 68-point campaigns the last two years.

But teammates are glad he’s finally getting some recognition outside their sphere.

“He’s put up some numbers a few years in a row and [wasn’t] one of the Norris candidates,” Capitals centre Evgeny Kuznetsov said. “This is the year he’s going to prove more and more — not in this locker room, but prove to [the media] so you can vote for him.

“He doesn’t get talked about around the league.”