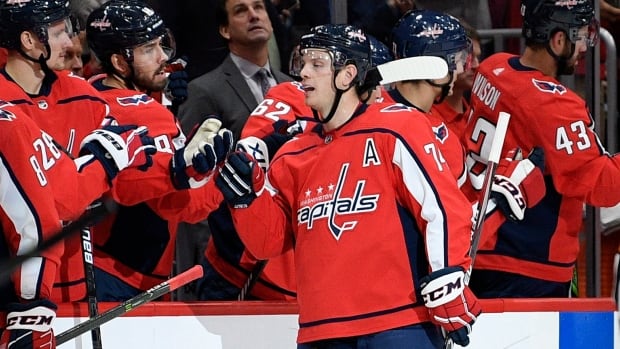 John Carlson scored and had two assists, giving the defenceman an NHL-high 14 points, and the Washington Capitals beat the Toronto Maple Leafs 4-3 Wednesday night for their first home win of the season.

Nicklas Backstrom added a goal and an assist, and Jakub Vrana and Evgeny Kuznetsov also scored for Washington, which lost its first three home games for the first time since October 1983. Two of those defeats came in overtime.

Kasperi Kapanen scored short-handed and assisted on Ilya Mikheyev’s goal as Toronto grabbed an early 2-0 lead. John Tavares scored late in the third to cut the deficit to 4-3.

Michael Hutchinson stopped 28 shots in his second start for the Maple Leafs, who lost on the road for the first time this season.

Toronto still led after the first intermission, but that turned into a 4-2 deficit during a 68-second stretch of the second period.

First, Kuznetsov took Carlson’s pass on the break, cut in from the left and wrapped a backhand around Hutchinson’s left pad with 14:53 left in the period. Just 11 seconds following the restart, Backstrom’s one-timer off T.J. Oshie’s feed beat Hutchinson to give Washington the lead.

Within 30 seconds of that, Nicholas Shore and Codi Ceci both took minor penalties to give the Capitals a 5-on-3. And with 13:35 remaining in the period, Carlson scored off Alex Ovechkin’s feed for Washington’s seventh power-play goal of the season.