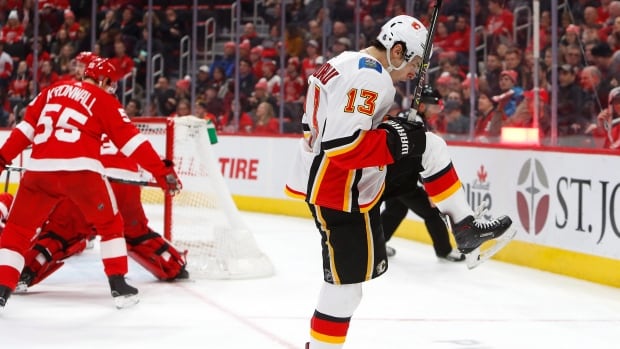 Johnny Gaudreau’s power-play goal with 10:23 left lifted the Calgary Flames to a 5-3 victory over the Detroit Red Wings on Wednesday night.

Gaudreau put the Flames ahead 4-3 after a slick play by Matthew Tkachuk, who stickhandled below the goal line and then slipped a pass between goalie Jimmy Howard and the side of the net. Gaudreau was in front to tap in the puck for his 22nd goal of the season.

Frolik scored into an empty net with 17.7 seconds remaining.

Gaudreau is Calgary’s representative among the Pacific Division All-Stars. The rosters were unveiled Wednesday. Howard made the Atlantic Division team for Detroit.

The Flames have 54 points, most in the Western Conference.

Helm, who missed the previous 21 games with an upper-body injury, marked his return with a goal in the first period. He and Athanasiou came in on a 2-on-1 break. Rather than passing, Helm dragged the puck past a sliding defenseman, switched to his backhand and beat goalie Mike Smith.

The Red Wings made it 2-0 on a goalmouth scramble. Detroit’s Michael Rasmussen hacked at the puck, and it bounced off de la Rose and in.

Calgary rallied in the second. Monahan made it 2-1 with his 22nd goal of the season, and Brodie tied it when his routine shot from the point bounced off Howard’s glove and in with 2:01 left in the period.

Brodie’s goal started a wild stretch in which three goals were scored in just more than a minute. Athanasiou had a step on Oliver Kylington when the Calgary defenseman hooked him. Officials awarded a penalty shot that Athanasiou converted for his 14th goal of the season.

The Flames quickly tied it at 3 when Lindholm beat Howard with a wrist shot on the power play with just under a minute left in the period.