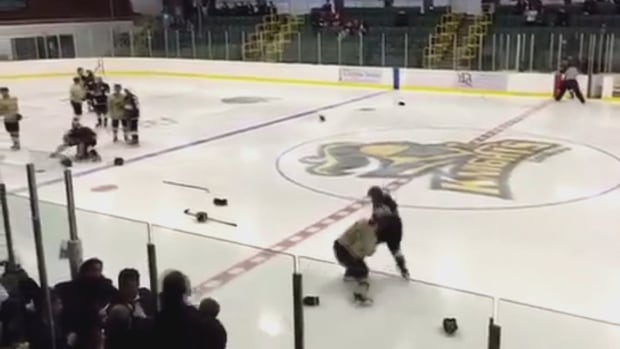 A B.C. junior hockey league’s attempt to expel an entire team because of its owner’s actions during an on-ice brawl has been halted by a judge, who called the move “unfairly prejudicial and oppressive.”

In a decision last week, B.C. Supreme Court Justice Janet Winteringham ordered the Pacific Junior Hockey League to immediately end all proceedings against the Surrey Knights and its owners related to the 2015 fight.

“I am satisfied that the conduct of the league was unfairly prejudicial and oppressive,” Winteringham wrote in her judgment.

She said the PJHL needed to ensure the rights of the entire team were respected during the proceedings.

At the centre of the dispute was a scrappy game between the Langley Knights and the Mission City Outlaws on Sept. 24, 2015 — the Knights would move to Surrey the next year. The Knights’ co-owner, John Craighead, was also the team’s coach at the time.

During the third period of the game, one Langley player was sent to hospital after an illegal hit, and the two teams racked up more than 260 minutes of penalty time, according to the court judgment.

The violence culminated in an all-out brawl that was caught on camera. At some point, Craighead left his bench and crossed to the Outlaws’ bench — he would later be accused of assaulting the other team’s coach and a 17-year-old player.

Langley Knights coach insists he was trying to stop fight 0:31

At the time, Craighead told CBC he only approached the other team to de-escalate the violence. The RCMP investigated, but in the end, criminal charges were not approved.

But hockey officials also launched an investigation, and Craighead was ultimately suspended for three years from coaching.

‘A breach of the requirements of procedural fairness’

Just one week after Hockey Canada issued its final decision on Craighead’s case in May 2017, the PJHL moved to expel the Surrey Knights in response to a complaint from the league’s vice president.

The league’s president, Ray Stonehouse, was at the game the night of the fight and swore an affidavit setting out what he witnessed. Because of that, he recused himself from all hearings concerning the future of the Knights.

And yet, Stonehouse continued to deal with other matters related to the proceedings, including decisions about document disclosure and whether to allow a preliminary hearing, according to the judge.

“Mr. Stonehouse should not have participated in these decisions let alone render them. To do so, constituted a breach of the requirements of procedural fairness,” Winteringham wrote.

She also found that the team and Craighead’s co-owner, Amar Gill, weren’t given enough notice of the complaint or time to prepare a defence.

And she said the entire process was unfair to Gill and the team.

“The PJHL did not recognize the interests of the team when it commenced the proceedings to expel. This was in circumstances where the team and Mr. Gill were at all times innocent of any wrongdoing and the PJHL never suggested otherwise,” Winteringham wrote.

The expulsion proceedings against the team were put on pause when the Knights filed suit against the league last year. The judge has now ordered the PJHL to take no further action against the Knights and said it should pay the team’s legal costs.