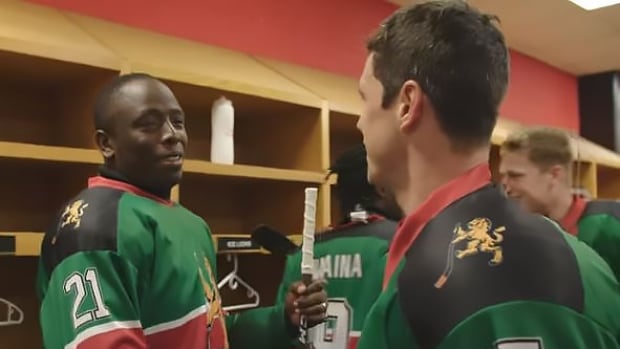 Benard Azgere can’t believe how the past two months — especially the past two days — have transformed hockey in Kenya.

Azgere and his teammates on the Ice Lions, Kenya’s only hockey team, were featured in a video released on Monday in which Tim Hortons brought them to Canada to play in their first game. Filmed in mid-August, the highlight of the viral video is when NHL stars Sidney Crosby and Nathan MacKinnon join the Ice Lions to play against a local rec team made up of firefighters.

“It’s overwhelming. The reception back at home, globally, it’s quite overwhelming,” said Azgere on Tuesday in a return visit to Toronto. “On our official Facebook page things are running out of control. We’re really honoured that people have embraced us like this. It’s not what we expected at all.”

The Ice Lions were discovered when they filmed some of their practice sessions at a pleasure skating rink in Nairobi and posted the videos to YouTube. The new gear they were given for the game and the positive response they’ve gotten in Kenya and Canada has jump started their fledgling hockey program.

“It’s now been almost two months since we were here. When we went back home, things had changed. It’s not business as usual,” said Azgere. “We’ve intensified our training sessions. We’re hoping to get more players training with us. There’s a craze back in Nairobi now with people wanting to know more about ice hockey, some wanting to join the team.”

Like a lot of rec hockey teams in Canada, the Ice Lions had no goalie. Instead, they practised with a rubber penguin in net. If the puck hit it, it counted as a goal.

When they played the game in Toronto this past summer they borrowed a goalie from their opponents. But the gear donation from Tim Hortons and CCM included goalie equipment, and two volunteers are now willing to give it a try between the pipes.

“All they’ll need is proper training,” said Azgere. “For us, individually, we’ve been learning from YouTube.”

Kenya also has a women’s hockey team in development and Azgere is in negotiations with teams from South Africa, Egypt, Morocco, Tunisia and Algeria for an all-African tournament. His hope is that the teams will be made up of all native Africans and be a stepping stone for hockey on the continent.

“It may not happen this year, next year, but trust me, one day, you’ll remember this day because Kenya will play in the Olympics.”