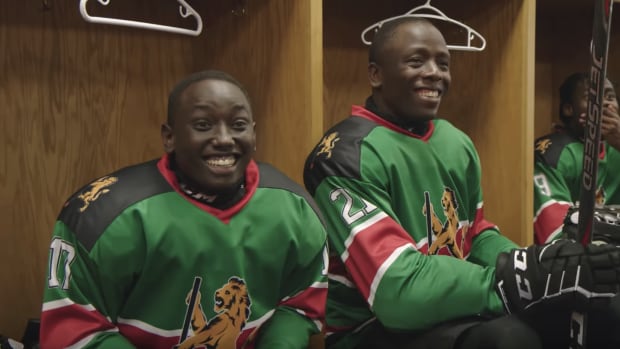 The story of Kenya’s only men’s hockey team has hit the internet right in the feels.

With only enough players to create one team, the Kenya Ice Lions had never played a game against an opponent — until now.

In a three-minute video sponsored by Tim Hortons’ called “The Away Game”, the Ice Lions make their way to Canada and are greeted by new custom jerseys and full sets of gear.

But the day gets even better when the Kenyan players realize they’ll be joined on the ice by Pittsburgh Penguins’ captain Sidney Crosby and Nathan MacKinnon of the Colorado Avalanche, both of whom have endorsement deals with the coffee shop company.

“I couldn’t say anything,” Arnold Mburu told the Toronto Sun. “I had no idea. We were all dressed up and because we were a few guys short, they told us they are going to get extra guys. But then Crosby walks in. And MacKinnon’s face is right behind them. And I can’t believe it.”

The setting was a huge change from the Ice Lions’ home rink in Nairobi, Kenya. The first ice rink in East and Central Africa, it has no boards and is just 1,400 square metres in size.

The moment was something special for Crosby and MacKinnon as well.

“One of the things I love about hockey is how it’s able to reach so many people from so many countries around the world and bring them together,” Crosby said in a statement about the event.

More than 225,000 people have already watched the video on YouTube, and thousands more have voiced their support on Twitter.