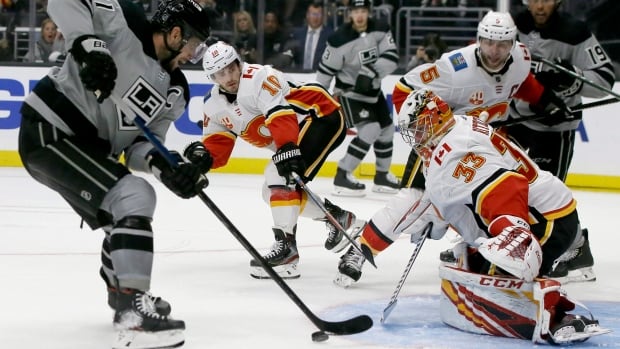 Jeff Carter had a goal and assist, Jonathan Quick made 23 saves and the Los Angeles Kings snapped a three-game losing streak with a 4-1 victory over the Calgary Flames on Saturday night.

Tyler Toffoli, Anze Kopitar and Ilya Kovalchuk also scored for the Kings, who put the game out of reach with a three-goal second period. Quick got his first victory of the season in his fourth start. He was on track to get a shutout until Mikael Backlund scored on a penalty shot with 2:10 remaining.

David Rittich, who came in with a 2.55 goals-against-average, allowed four goals on 28 shots in two periods. Cam Talbot came in for the final 20 minutes and made eight saves for the Flames, who have dropped three straight road games.

Toffoli scored 75 seconds into the game to end the goal drought at 136 minutes, 51 seconds. The Kings’ centre got the puck on a pass from Blake Lizotte just outside the Calgary zone, made a nice move past two Flames defenders and put a wrist shot past Rittich for his third goal of the season. It was only second time this season the Kings have scored first.

Carter put Los Angeles up by two 15 seconds into the second when his backhand went off the skate of Calgary defenceman Mark Giordano and found its way into the net. Kopitar scored the Kings first short-handed goal of the season five minutes later when he beat Rittich on his glove side on a breakaway.

Kovalchuk then added a power-play goal at 8:58 with a slap shot from just beyond the left faceoff circle after a cross-ice pass from Michael Amadio. It was the Kings’ first goal with the man-advantage in six games and snapped skid where they were 0 for 19.