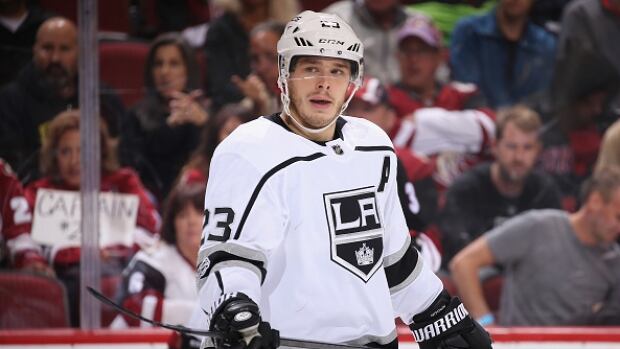 Los Angeles Kings forward Dustin Brown is out indefinitely with a broken finger.

The Kings announced the extent of the 33-year-old Brown’s first significant injury Sunday.

Brown was hurt during Los Angeles’ preseason finale against the Anaheim Ducks on Saturday night. He left the game in the second period shortly after getting his with a shot by teammate Anze Kopitar during a power play.

Brown has been a model of durability during a lengthy NHL career spent entirely with Los Angeles. The hard-hitting wing has missed only 18 total games since he cracked the Kings’ lineup for good in 2005.

He has never missed more than four games in any season since 2005, and he has played in all 82 games five times. He has also played in all 85 of the Kings’ playoff games during his career.

Brown revitalized his career last season with 28 goals and 33 assists for the Kings, posting a career-high with 61 points, and reasserting himself as an agitating two-way player with a strong power-play presence and a knack for drawing penalties.

The two-time U.S. Olympian was the captain of the Kings’ Stanley Cup-winning teams in 2012 and 2014. He ceded the captaincy to Kopitar in 2016 after a few years of declining production.

The Kings open the regular season at Staples Center on Friday night against the San Jose Sharks.