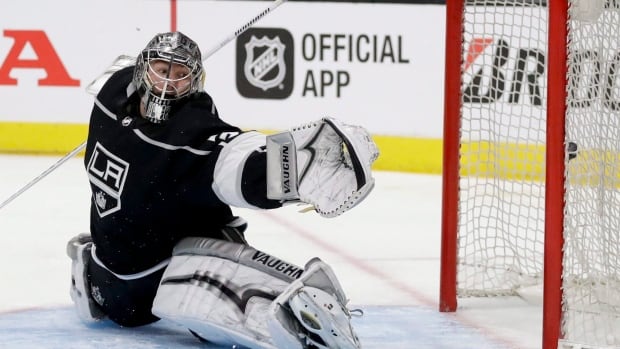 Los Angeles Kings goalie Jonathan Quick is out indefinitely after undergoing surgery on a torn meniscus in his knee, the club announced Wednesday.

Quick has appeared in just four games this season for the Kings, going 0-3-1 with a 4.55 goals-against average. He missed five games with a lower body injury after playing in Los Angeles’ season opener, but has allowed 14 goals in three games since returning.

He didn’t play in the Kings’ two most recent games while nursing a different lower body injury. Coach John Stevens had said he didn’t think the current problem would sideline Quick for a lengthy amount of time.

Jack Campbell has been the Kings’ primary goalie during Quick’s absences this season, going 3-4-0 with a 2.72 GAA and a .912 save percentage. The 26-year-old former first-round pick had just two games of NHL experience before this season.

The disappointing Kings are in last place in the Western Conference at 3-7-1 heading into their home game against Philadelphia on Thursday night.

Quick is the winningest goalie in Kings history, a two-time Stanley Cup champion and the winner of the Conn Smythe Trophy as the NHL post-season MVP in 2012. The former U.S. Olympian won the Jennings Trophy for the second time last season as the goalie for the NHL team with the fewest goals allowed.

Quick is in his 11th season as Los Angeles’ starting goalie, but his unorthodox, highly athletic playing style has been affected by injuries before. He missed 59 games with a groin injury during the 2016-17 season, and he missed 24 games during the 2013-14 season with a similar groin injury.