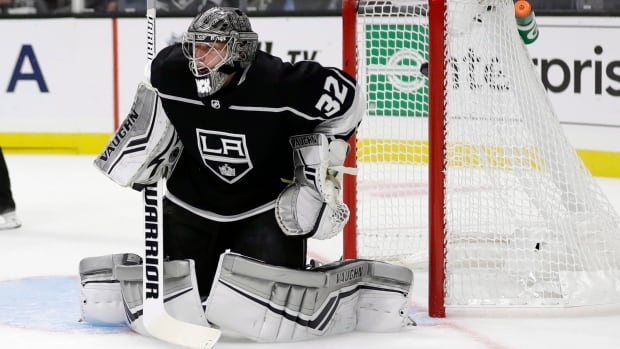 Los Angeles Kings goalie Jonathan Quick will not start against the Detroit Red Wings on Sunday night because of a lower-body injury.

Quick sustained the injury in practice Saturday and is day-to-day.

Jack Campbell will start against Detroit. Campbell went 2-0-2 with a 2.48 goals-against average and .924 save percentage in four starts for Los Angeles last season.

Kings coach John Stevens said Quick would undergo further evaluation to determine the extent of the injury and did not know if he would be available for a four-game road trip that starts at Winnipeg on Tuesday.

Stevens said the Kings would call up either NHL veteran Peter Budaj or 23-year-old prospect Cal Petersen from their American Hockey League affiliate prior to Sunday’s game.

“In terms of after today, we’ll going to have to wait and see,” Stevens said, “If he’s not ready to go, then that player will stay with us, whether it is Buds or Cal.”

Quick, the 2012 Conn Smythe Trophy winner during the Kings’ first Stanley Cup-winning season and two-time Jennings Trophy winner for fewest goals allowed during the regular season, saved 30 of 33 shots in a 3-2 overtime loss to San Jose in the season opener on Friday.

Quick has won at least 33 games in six of 12 seasons in the NHL, including three of the past four seasons.