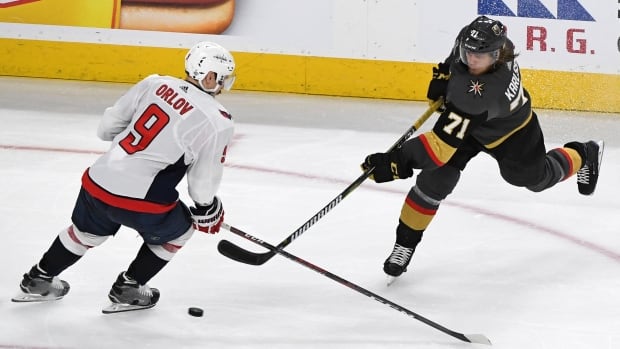 Vegas forward William Karlsson is among 43 NHL players seeking salary arbitration after he finished third in the NHL in scoring with the expansion Golden Knights last season.

Two more Golden Knights, defenceman Colin Miller and forward Tomas Nosek, also are on the list of players electing to have an arbitrator determine their contracts, the NHL Players’ Association announced on Thursday.

The number was 44 before the Hurricanes agreed to a $4.6 million, two-year contract with defenceman Trevor van Riemsdyk, a restricted free agent. Van Riemsdyk will make $2.1 million next season and $2.5 million in the finale year of the deal.

Karlsson had a career-best 43 goals and 78 points, putting himself in position to earn a considerable raise after completing a two-year, $2 million contract.

Winnipeg has five players on the list, including goalie Connor Hellebuyck and defenceman Jacob Trouba. Hellebuyck tied for the NHL lead for most wins with a 44-11-9 record, and was eighth with a 2.36 goals-against average.

Ottawa forward Mark Stone is seeking arbitration after leading the Senators with 62 points.

The Minnesota Wild have two of their top five point producers on the list in forward Jason Zucker and defenceman Matt Dumba.

Newly acquired Flames forward Elias Lindholm is one of five Calgary players seeking arbitration. He was dealt to Calgary in a multiplayer trade two weeks ago after failing to negotiate a long-term extension with Carolina.

Players are allowed to negotiate and sign contracts before appearing at their arbitration hearings, which will be held in Toronto from July 20 to Aug. 4.