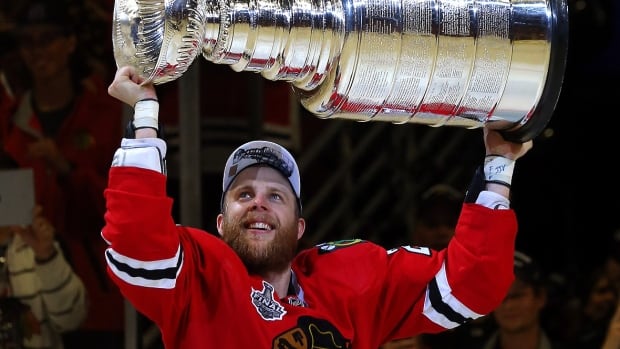 Versteeg won Stanley Cups with the Chicago Blackhawks in 2010 and 2015. He scored outdoor-game goals for the Blackhawks at both Wrigley Field (2009) and Soldier Field (2014).

He was a Calder Memorial Trophy finalist for the league’s top rookie in 2009 with 22 goals and 31 assists.

He underwent hip surgery during the 2017-18 season. Versteeg played his final NHL game on March 18, 2018 for the Flames against the Vegas Golden Knights.

‘I took a lot for granted’

“What a run it was,” Versteeg said Tuesday in a statement released by the NHL Players’ Association.

“A kid from North Lethbridge who played on the streets every day, dreaming of playing in the NHL. I took a lot for granted in my time in the NHL.

“But the one thing I never took for granted were the relationships I made with my teammates and staff of the hockey clubs I played for.”

“There was one guy who took a kid with a different personality and a massive chip on his shoulder and helped give him hope, and that was Scott Gordon,” Versteeg said. “Dale Tallon also took a chance on me and gave me multiple opportunities throughout my career.

“I know I wasn’t always the easiest to deal with. Without people like Scott and Dale, the road to today would not be what it was.

“Thank you to every organization I was able to play for. I didn’t realize it then, but I certainly appreciate now how amazing it was to play in the NHL.”

Versteeg re-joined the Blackhawks organization to start this past season as captain of the American Hockey League’s Rockford IceHogs.

He left the organization in November and played his final professional game in Slovakia with HK Nitra with his brother Mitch as a teammate.

Versteeg lives in Brooklin, Ont., with his wife Brittany and their three children.