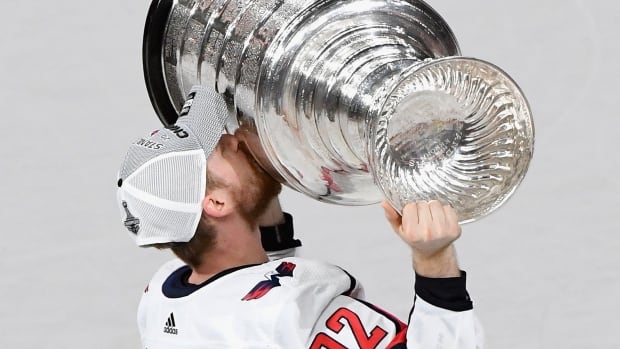 Fellow Russian linemate Evgeny Kuznetsov and goaltender Braden Holtby certainly did some heavy lifting of their own.

In helping deliver a championship Washington had wanted for more than 40 years, Kuznetsov was arguably the Capitals’ most instrumental player. The 26-year-old, fifth-year pro finished with a playoff-leading 32 points, including his 20th assist in Thursday night’s series-clinching 4-3 win over the Vegas Golden Knights in Game 5.

“He was unbelievable,” Ovechkin said of Kuznetsov. “He makes the magic over there.”

Holtby is now 45-37 in 82 career playoff appearances — all with the Capitals — while compiling a 2.04 goals-against average, .929 save percentage and six shutouts. That is the second-highest save percentage and fifth-best GAA in NHL postseason history among goaltenders with at least 50 outings.

Washington coach Barry Trotz said it took losing the No. 1 role to Philipp Grubauer late in the regular season and the start of the postseason for Holtby to rediscover the foundation of his game he developed in Saskatchewan.

“Just like all great goaltenders, you go through some dry spells in your game where you lose your way a little bit and your foundation,” Trotz said. “We had a conversation and he was very respectful. He understood that he wasn’t going to start in the playoffs. And he said, `If I get a chance to go back in, I’m gonna be really good for you.’ And he was.”

His unbelievable stick save on Alex Tuch to lock up a win in Game 2 will ring forever in Caps history.

“I think any big play is going to be a turning point,” Holtby said humbly. “It was a big play in the game, but the credit really goes to our guys because we didn’t get complacent. We knew we could do something special and we did.”

With Ovechkin, Kuznetsov and Holtby leading the charge, Washington wasn’t about to blow another 3-1 lead, an unwelcome feature of its postseason past. Prior to this season, the Capitals had lost five series when leading 3-1, the most in the NHL.

After losing Game 1, the Capitals won four straight to win the Cup, outscoring the Golden Knights 16-8 along the way. For the series, Kuznetsov scored one goal and assisted on seven others, including Jakub Vrana’s goal that opened the scoring for the Capitals in Game 5.

“Kuz is a great player, he’s a really, really talented player,” Vrana said. “He can be the difference every game. He’s just unbelievable.”

While Trotz acknowledged Ovechkin’s play and how much he’s meant to the franchise, he said Kuznetsov single-handedly took over games for the Capitals and proved to be just as valuable during their championship run.

So much so, he wasn’t sure who was going to be named MVP of the Final.

“That was a toss-up for me, I thought they were neck and neck if you ask me who gets the Conn Smythe, I thought that’s gonna be a tough choice,” Trotz said. “You probably have to split that in half for me.”

Trotz said Kuznetsov is just scratching the surface, and the rest of the league is starting to find just how good he is.

Kuznetsov, who finished the regular season with 27 goals and 56 assists, scored 12 goals and had 20 assists in the postseason. He was instrumental in Washington’s 6-2 demolition of the Golden Knights in Game 4, when he registered four assists to tie a single-game Stanley Cup Final record.

“Since Day 1 of training camp, we really play for each other, we work for each other and we really try to help the young guys, older guys — it doesn’t matter,” Kuznetsov said. “We just play for your partner and we compete every day.”