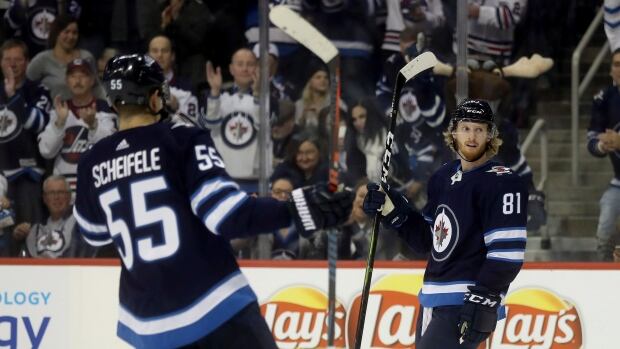 Kyle Connor scored for a third straight game to help lift the Winnipeg Jets to a 2-1 victory over the Los Angeles Kings on Tuesday.

Ilya Kovalchuk scored his first goal for the Kings (1-1-1) and the 418th of his NHL career. He left the league five years ago to play professionally in Russia, but signed a three-year deal with the Kings in June.

The 35-year-old got behind Winnipeg’s defencemen, skated to the net and redirected a Drew Doughty pass into the net at 6:26 of the opening period.

The Jets tied it up four minutes later when forward Brandon Tanev spun away from a defender along the boards and sent a quick pass to the slot for Scheifele’s first goal of the season at 10:59.

Winnipeg outshot the visitors 10-4 and had one power play in the first period.

The Jets had almost back-to-back power plays near the midway point of the second period and were successful on the second one when Connor poked the puck in with his stick after a Blake Wheeler shot went off Campbell and began heading toward the goal line at 10:21.

Winnipeg’s shot advantage in the second was 19-5.

Hear us out: The NHL is a lot more fun this season:

Los Angeles had its first power play of the game midway through the third, but Hellebuyck made a big save and then got a piece of another shot that hit the crossbar.

Winnipeg defenceman Tyler Myers was called for high-sticking with 3:02 remaining. Campbell went to the bench with about 90 seconds left to make it six on four, but couldn’t convert with the advantage.

The Jets travel to Nashville for a game Thursday, while the Kings play the second game of their four-game road trip in Montreal the same night.