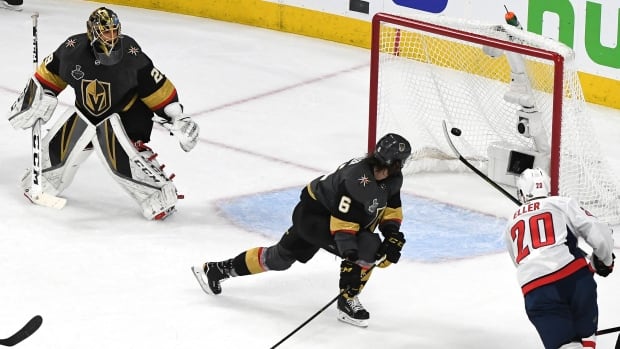 Lars Eller says the more he plays, the better he plays.

The versatile Capitals centre showed that in Game 2 of the Stanley Cup Final, and could get even more opportunities in big moments with the status of one Washington’s Conn Smythe Trophy favourites very much up in the air.

Eller had a goal in two assists Wednesday as the Capitals beat the Vegas Golden Knights 3-2 to even the best-of-seven series 1-1 and wrestle away home-ice advantage.

The 29-year-old Dane was bumped up from his third-line role to the second unit after No. 1 centre Evgeny Kuznetsov got rocked by Vegas defenceman Brayden McNabb in the first period. The slick Russian, who leads NHL playoff scoring with 11 goals and 14 assists, departed clutching his left arm and didn’t return due to what the Capitals called an upper-body injury.

On a conference call with reporters Thursday, Washington coach Barry Trotz called Kuznetsov day-to-day. He said he might have an update Friday when the Capitals are scheduled to return to practice.

The hit seemed to spark Washington, which trailed 1-0 at the time, with Eller tying the score before setting up a power-play effort from Alex Ovechkin and Brooks Orpik’s first goal in 220 games for a 3-1 lead against the expansion Knights.

“Stanley Cup Final — you want to be on the ice, not on the bench,” Eller said afterwards. “I enjoy every single moment of it.”

And he has good reason to.

“He was outstanding,” Capitals centre Nicklas Backstrom said. “He’s had a great playoffs so far. It’s fun to watch. That’s what we need. We need everyone to step up and he really did.”

Acquired from the Montreal Canadiens at the 2016 draft for two second-round picks, Eller re-upped with Washington in February by signing a five-year contract extension worth US$17.5 million.

“He’s a guy who is kind of our secret weapon,” Ovechkin said. “It’s hard to play (against him) when he’s on top of his game and when he feels the puck.”

Part of the reason the Capitals didn’t flinch at the loss of Kuznetsov — a potential playoff MVP candidate — is because they’ve been here before this spring. Washington was without Andre Burakovsky to start the post-season, saw Tom Wilson suspended three games, and lost Backstrom for four contests with a hand injury.

“Every time this team’s faced some adversity … players have just stepped up to the plate and everybody has just been a little bit better,” said Eller, who missed a chance at a wide-open net that could have tied the score late in Monday’s 6-4 loss in Game 1. “You lose one of you best players and we hope to have him back soon, but we showed (Wednesday) and we showed in the past that we can win even when one of our best players goes down.”

That ability to weather a storm hasn’t just come when a teammate’s missing, but also when the club finds itself in a hole.

Washington lost its first two games to open the post-season at home to the Columbus Blue Jackets before winning four straight. The Capitals also fell behind 1-0 to the Pittsburgh Penguins — their playoff nemesis — in the second round.

“We feel comfortable at any point in a series,” said goalie Braden Holtby, who made a miraculous stick save with two minutes to go Wednesday to help preserve the win. “That’s one of the beautiful things of our group.”

Then in the Eastern Conference final, they trailed the Tampa Bay Lightning 3-2 before posting back-to-back shutouts to advance.

A past incarnation of this franchise might have crumbled any number of times — playoff heartbreak was becoming the norm — but these Capitals feel different.

“This group has learned so much. They’ve gotten so resilient,” Trotz said. “This group has had everything thrown at them and they just say, ‘We’re going to push on. We’re getting close. We have a vision of what we want to do.’ They really just want to continue to keep playing.

“They’re committed. They’re all in. That’s our strength … we’ve had everything thrown at us.”