Mike Babcock has been pleased with the overall body of work from Auston Matthews and Patrick Marleau early on this season.

The duo put up dominant possession numbers at 5 on 5 and were on the ice when linemate Kasperi Kapanen opened the scoring for Toronto in Wednesday’s 4-2 road victory against the Winnipeg Jets that snapped a two-game slide.

But after pucks flew into the net for Matthews during the first two weeks of the schedule — he had seven consecutive multi-point games to top the NHL scoring race — the 21-year-old hasn’t found the scoresheet in his last three outings.

The 39-year-old Marleau, meanwhile, has just one point over the last seven.

“I’ve liked lots about them (in) lots of games,” Babcock said following Friday’s practice. “In a few games they weren’t as good. We’re challenging them to cycle the puck more, spend more time in the offensive zone. Less time rush, more time O-zone … because the rush goes away as the year goes on.”

Kapanen bumped Tyler Ennis off the line with Matthews and Marleau three games into the season to take up the spot reserved for William Nylander whenever the Leafs and the talented restricted free agent finally resolve their contract impasse.

Nazem Kadri’s first of the season was enough to hold off Winnipeg in Toronto’s 4-2 win. 1:39

“Those guys are working hard,” Babcock added. “They had a real good game last game.

“They had a real heavy shift when Kappy scored his goal to get us going.”

Despite the 18-year age difference, Matthews and Marleau found instant chemistry away from the rink in the veteran winger’s first season with Toronto in 2017-18. Along with fellow youngster Mitch Marner, Matthews spent a lot of time with the Marleau family and their four boys.

The transition on the ice hasn’t been quite as seamless — Marleau’s only goal so far through 10 games came on the power play with Matthews on the bench — but the pair feels they’re close to clicking. 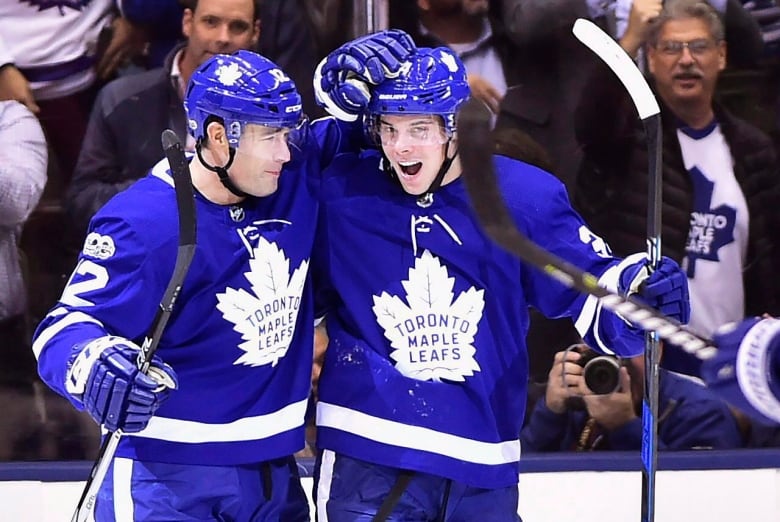 “It’s a work in progress,” Marleau, who also has four assists, said earlier this week. “I’ve had a lot of great looks … but you always want more.”

Matthews said the key is figuring out each other’s tendencies, especially as opponents buckle down following Toronto’s early goal surge that saw the Leafs score a league-high 33 times though seven games.

“There’s always room to improve,” Matthews said as his team prepared to host Winnipeg in Saturday’s rematch. “It’s good for us to get together, watch video, talk about different stuff.

“We want to be dominant every night and every shift. Obviously it’s not going to happen, just the way it goes, but we expect a lot from ourselves and definitely want to take another step.”

The star centre has been getting plenty of chances during his mini-slump — if you can even call it that. He’s fired 23 shot attempts over Toronto’s last three outings, including a game-high 11 in last Saturday’s 4-1 home loss to the St. Louis Blues.

“Teams are dialled in with their systems and there’s less and less space,” said Matthews, who has 16 points (10 goals, six assists). “I liked our game (against Winnipeg), we had a lot of chances. Kappy buried one to get us going.

“We’re getting chances, just haven’t been able to capitalize.”

The Leafs sit 7-3-0 heading into Saturday’s tilt with the Jets, who had a 6-3-1 mark before Friday’s visit to Detroit to take on the Red Wings.

Winnipeg has a had a decent start after making the Western Conference final for the first time in the city’s history last spring, but there are concerns in the Manitoba capital.

One is that Patrik Laine, who had 44 goals in 2017-18, has found the back of the net just three times heading into Friday, with each coming on the power play. Of his five points, the player selected second behind Matthews at the 2016 draft has just one at even strength.

Toronto got back to its speed game Wednesday thanks to improved breakouts and more support for the puck carrier following the loss to St. Louis — a setback that was preceded by a 3-0 home shutout at the hands of the Pittsburgh Penguins.

“I’m sure (the Jets) have done their film … it’s going to be a different look,” said Leafs centre Nazem Kadri, who scored his first of 2018-19 on Wednesday. “They’re a quick, heavy team.”

Toronto enters Saturday just 2-3-0 at Scotiabank Arena — those three regulation losses were tied with four other clubs for the most in the league ahead of Friday — a far cry from a perfect 5-0-0 road mark the Leafs share with the Nashville Predators.

“We’re executing our gameplan a little better so far on the road,” said Toronto centre John Tavares, who snapped a five-game goal drought Wednesday. “When teams do come into our building there’s a lot of excitement and preparation.

“We just have to be a little sharper.”