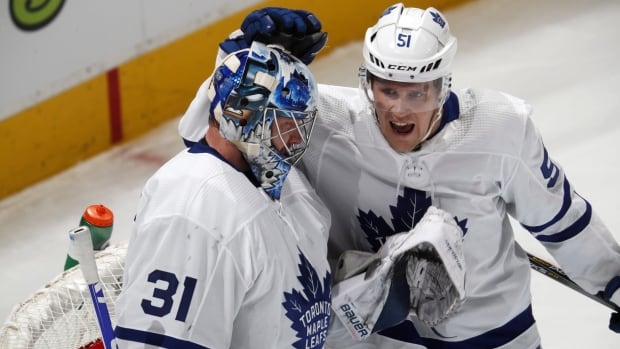 Toronto Maple Leafs defenceman Jake Gardiner returned to practice in a non-contact jersey Thursday, his first action with teammates since suffering a back injury that’s kept him out of the lineup since Feb. 25.

The return of the duo can’t come soon enough for the Leafs with the playoffs approaching and the team needing to be better in its own zone.

In the final year of his contract and likely set to leave in unrestricted free agency this summer, Gardiner missed two games with back spasms before the all-star break, but Toronto general manager Kyle Dubas said earlier this month the two injuries weren’t related.

The high-risk, high-reward Gardiner was the focus of growing fan angst in January after a couple of rough outings — with some sections of the crowd at Scotiabank Arena booing the 28-year-old.

The Leafs, who are just 3-4-2 over their last nine games, visit the Ottawa Senators on Saturday night.

Dermott said he hopes to play in that one, while Toronto head coach Mike Babcock said “ideally” Gardiner will get into the lineup before the end of the regular season next Saturday.