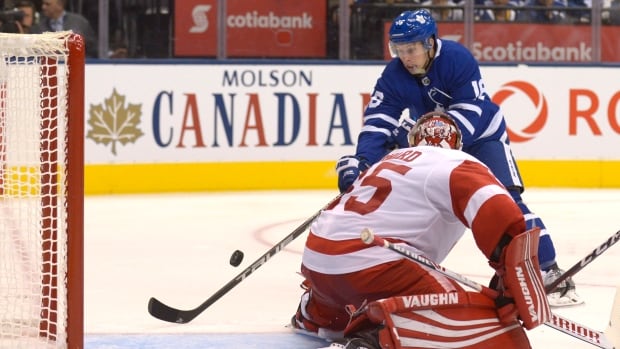 The Toronto Maple Leafs broke open a tight game with a four-goal outburst in the second period en route to a 6-2 victory over the Detroit Red Wings on Friday night at Scotiabank Arena.

Jake Gardiner, John Tavares and Patrick Marleau scored on the power play and Par Lindholm added a shorthanded goal — all within a span of 3:54 — to help Toronto improve its pre-season record to 6-1-0.

Gardiner added another goal late in the third period and Nazem Kadri also scored for the Maple Leafs. Gustav Nyquist and Dylan Larkin replied for Detroit (6-1-0).

The teams will close out their pre-season schedules Saturday night with the back end of the home-and-home set at Little Caesars Arena.

The Maple Leafs iced a lineup that will be similar to the one they’ll use in their regular-season opener Wednesday against the Montreal Canadiens.

Kadri opened the scoring 98 seconds into the game by taking advantage of some lax Detroit defence.

Frans Nielsen and Dennis Cholowski put up little resistance as Kadri moved the puck to his forehand and found the top corner on Jimmy Howard’s blocker side.

Detroit pulled even with a power-play goal at 10:21. Cholowski carried the puck to centre and used a nifty backhand saucer pass to find Nyquist, who cut behind the Toronto defence and rifled the puck past Frederik Andersen.

Toronto had a glorious chance while shorthanded late in the period. Mitch Marner intercepted the puck, left it for Gardiner, who shovelled it to a wide-open Frederik Gauthier, but Howard stood his ground.

The pace was decent for a pre-season affair but the play was choppy at times. The offence came with a flurry in the second period as Toronto showed off its special teams.

Gardiner got things started by floating a shot from the point that beat a screened Howard at 12:47. With a two-man advantage, Auston Matthews slid the puck across the slot to Tavares, who one-timed it to make it 3-1 at 14:58.

Marleau padded the lead 27 seconds later. Josh Leivo’s wide slapshot came off the boards to the veteran forward on the other side of the net and Howard couldn’t get across the crease in time.

Strong forechecking work by Connor Brown paid off as he dug the puck free and found Lindholm, who beat Howard from a tight angle at 16:41.

Larkin cut into the Toronto lead at 1:10 by tipping in Nick Jensen’s wrist shot from the point. Gardiner added an insurance goal at 15:41.

The Red Wings will open the regular season Thursday at home against the Columbus Blue Jackets.