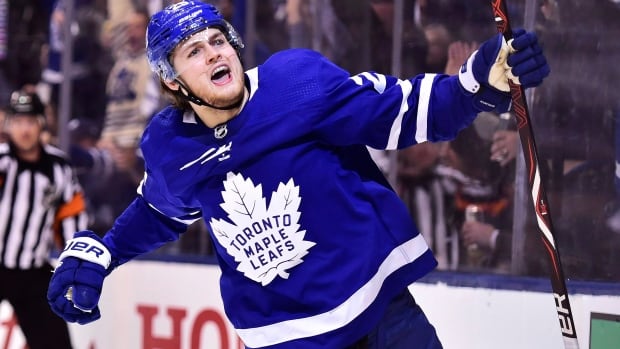 Maple Leafs president Brendan Shanahan says the team expects its star players to make financial sacrifices to be part of what’s hoped will be a long championship window in Toronto.

And that begins with the still-unsigned William Nylander.

Speaking at an event before the Leafs opened the NHL regular season at Scotiabank Arena against the Montreal Canadiens on Wednesday, Shanahan reflected on his three Stanley Cup victories with the Detroit Red Wings as personal proof that taking a little less money can be worth it in the long run.

“When I get together with some of my old mates from the Cup years in Detroit … we talk about winning together and growing together, and that’s what we remember,” Shanahan said. “We all found a way to fit with each other so that we could keep adding to the group.

“That’s obviously what we’re asking some of our young leaders to do.”

A restricted free agent without much leverage other than sitting out, the 22-year-old Nylander and the Leafs have been unable to agree on a new contract as negotiations have dragged through the summer, into training camp and now the season.

“[Leafs general manager Kyle Dubas] and I have the same vision for what we want to continue to build here and make it sustainable,” Shanahan said. “While these things are not easy to do, Kyle and I are on the exact same page as far as the things we need to do in order to achieve it.

“We’re big fans of William, we want William to be a part of this, but obviously this is a process that he needs to go through.”

Matthews, Marner due up

The Leafs also have to get contracts done in the near future with Auston Matthews and Mitch Marner — star 21-year-old forwards both set to become restricted free agents next summer — so whatever Nylander gets will set the bar.

And with veteran centre John Tavares making $77-million over the next seven years after joining the Leafs in free agency, there’s only a certain amount of money to go around.

“A lot of other voices, and understandably so,” Shanahan said of contract negotiations. “[Playing in Toronto] is not for everyone and we’re not for everyone, but we think the players that we currently have, while it’s not going to be easy, we have great confidence that they have bought into being a part of this program and being a part of the Toronto Maple Leafs and representing Toronto in a way that they understand what’s going to be most important.

“What I hope is they can look back on 20 years, 30 years down the road … and what’s going to be most important to them is whether or not they maxed out as an individual and a team and have championships to look back on and remember fondly.”

Rob Pizzo gets you ready for the Hockey Night In Canada podcast:

CBC Sports’ Rob Pizzo joins Reshmi Nair to let hockey fans know what they can expect from the HNIC podcast. 4:41

Shanahan, who won the Cup with Detroit in 1997, 1998 and 2002 in the pre-salary cap era, said he understands what Nylander is going through from a player’s perspective.

“He wants to play,” Shanahan said. “As a group we have a perspective of what we want to build here, how we need all these players. When I talk about looking back, we all did quite well.

Leafs defenceman Morgan Rielly and centre Nazem Kadri have already taken less than what they might have signed for on the open mark to remain in Toronto, while Tavares took fewer dollars than what other teams offered.

“He wanted to come here and win hockey games, he wanted to be treated fairly, and he is,” Shanahan said of Tavares. “And yes, that is what we hope for and expect from our players as we go forward. It’s not for everyone, but for the ones that will play here, that’s what we want from them, and I think that’s what they want from each other.

“That’s what they’ll look back on and remember the most — how they interacted with their teammates and whether they were able to be a part of something like this.”

On hand at an event unveiling a plaque honouring “the national historical significance” of the Leafs, Shanahan was also asked about the expectations in a city buzzing with dreams of ending a 51-year Cup drought.

“What’s more important to them and to us in what we set upon to do four years ago was build this in a manner in which this was not a one-year window. You can’t take for granted the opportunities in the years that you have in front of you, and you have to focus on the present, but it’s been our goal … to do this in a manner in which we can sustain this over a long period of time.”