John Tavares and Austin Matthews each had a goal and assist, and the Toronto Maple Leafs won for just the second time in six games, beating the Buffalo Sabres 4-2 on Wednesday night.

Mitchell Marner and Zach Hyman, into an empty net, also scored and the Maple Leafs inched to within four points of the idle Boston Bruins in the race for second place in the Atlantic Division standings. Garret Sparks stopped 22 shots for Toronto, which was playing on consecutive nights after a 3-0 loss at Nashville.

Toronto swept the four-game season series over Buffalo and improved to 22-11-4 on the road — one win shy of matching the franchise record set in 2003-04.

Casey Mittelstadt and Alexander Nylander scored for Buffalo, which dropped to 1-7-1 in its past eight. Coming off a 4-3 shootout win over St. Louis on Sunday, the Sabres have gone 41 games since winning consecutive outings. It’s a stretch dating to Dec. 11-13, during which Buffalo dropped to 12-24-5.

The lack of consistency has raised questions regarding Sabres coach Phil Housley’s job security just two seasons into his tenure. 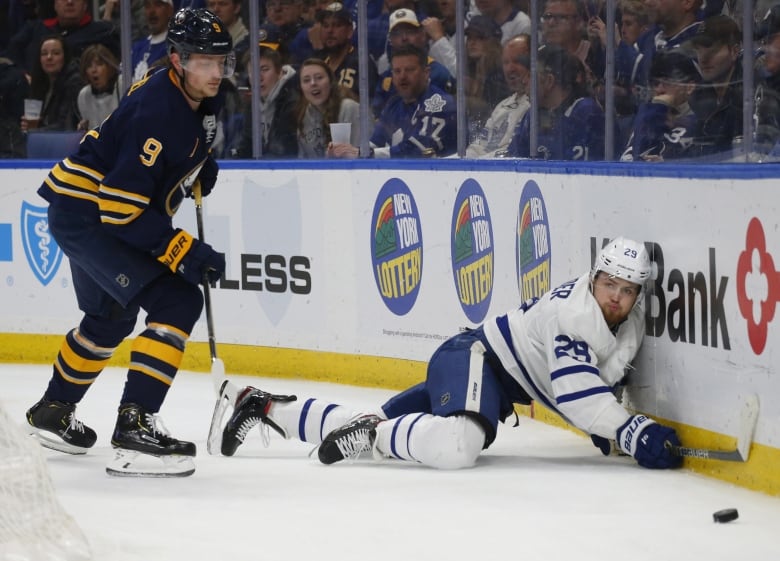 Toronto’s William Nylander is checked into the boards by Buffalo’s Jack Eichel on Wednesday. Eichel received a penalty on the play. (Jeffrey T. Barnes/Associated Press)

Last year, Buffalo became the NHL’s first team to finish 31st following the addition of expansion Vegas Golden Knights. This year, the Sabres have unraveled over the past four months and are in jeopardy of becoming the league’s second team to miss the playoffs in a season in which they won 10 straight games.

Tavares scored the go-ahead goal with 1:28 left in the second period by converting a puck that pingponged into the crease. William Nylander’s shot from the right circle struck the crossbar, then the post, and bounced to the left of the net, where it struck Buffalo captain Jack Eichel’s knee and ricocheted back into the crease, where Tavares tapped it in.

Tavares then set up Marner’s goal 22 seconds into the third period with a no-look backhand pass from the left boards. Marner was untouched in driving to the slot, where he snapped a shot under goalie Carter Hutton’s blocker.

Hutton was solid by making 42 saves in a game Toronto outshot Buffalo 46-24.

Buffalo’s Nylander — younger brother of Toronto’s Alexander Nylander — cut Toronto’s lead to 3-2 with 14:23 left when he one-timed in Vladimir Sobotka’s centring pass into the slot. 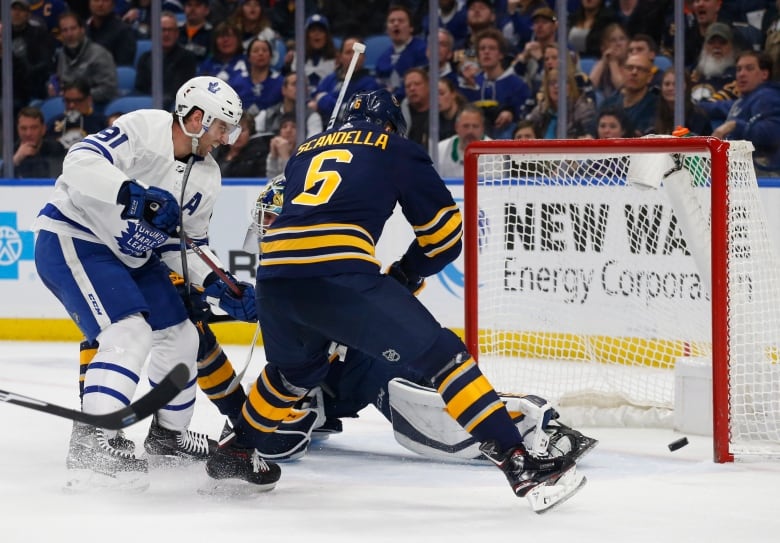 Sparks was coming off a 38-save performance in a 6-2 loss at Ottawa on Saturday, and suggested the Leafs needed to show more emotion.

Coach Mike Babcock, on Wednesday, agreed with the notion that Sparks’ comments might place more pressure on the backup goalie.

As for his expectations, Babcock said he wanted Sparks to focus on his own game.

“Any time you’re looking for any other help in life, it usually doesn’t go your way,” Babcock said. “So just own what you do and play as hard as you can tonight. We’re going to play hard for Sparky, and he’s going to play well.”

The Leafs thoroughly dominated the Sabres to open the game, but wound up trailing 1-0.

Buffalo was being outshot 17-2 through the first 11 1/2 minutes and 18-5 before Mittelstadt opened the scoring with a power-play goal at the 15:04 mark.

Rasmus Dahlin’s assist on Mittelstadt’s goal upped the rookie’s total to 38 points and moved him ahead of Bobby Orr for second-most by an NHL defenceman before his 19th birthday. The only player ahead of him is Housley, who had 57 points as an 18-year-old with Buffalo in 1982-83.