Justin Williams and Dougie Hamilton each banked in goals from behind Toronto’s net as the Carolina Hurricanes picked up a big two points in the Eastern Conference playoff race with a 4-1 victory over the listless Maple Leafs on Tuesday.

Jordan Staal also scored for the Hurricanes, while Hamilton added an empty netter.

Petr Mrazek stopped 22 shots for Carolina (44-29-7), which came in having lost three of its last four in regulation as the franchise looks to make the post-season for the first time since 2009 — currently the NHL’s longest streak of playoff futility.

The Leafs clinched a playoff spot for a third consecutive spring with Monday’s 2-1 road victory over the New York Islanders to set up a second-straight first-round matchup with the Boston Bruins.

Toronto entered Tuesday’s action four points back of Boston for second in the Atlantic Division, and home ice in the opening round, but will now start on the road after the Bruins defeated the Blue Jackets 6-2 in Columbus.

The Hurricanes, meanwhile, started the day in the East’s second wild-card spot — a point back of Columbus and one up on the ninth-place Montreal Canadiens, who beat the Tampa Bay Lightning 4-2 on Tuesday.

All three teams battling for the East’s two wild-card berths have a pair of games left on the schedule. 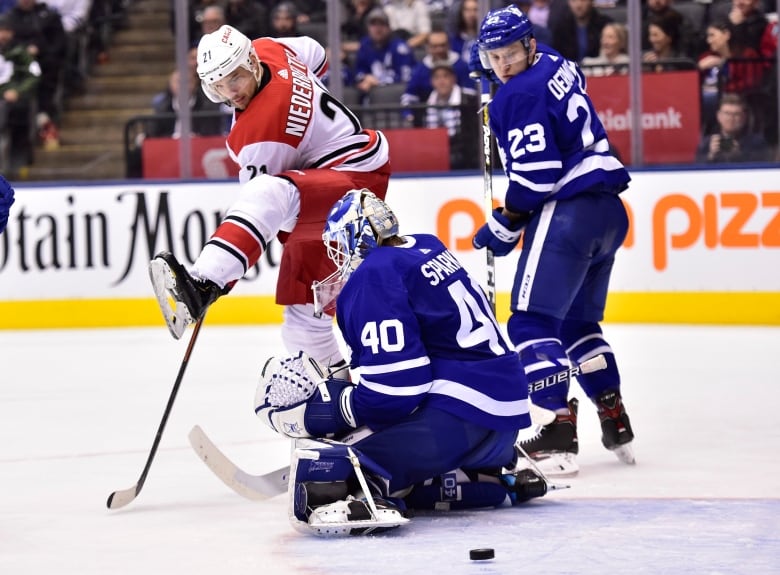 Playing the second of a back-to-back and its third in four nights, the Leafs were sluggish most of the evening against a motivated opponent.

Toronto fell behind 2-0 at 2:13 of the second period on a Carolina power play with Martin Marincin in the box for interference. Sparks made a desperation save on Hamilton at the side of the crease, but the Hurricanes defenceman managed to bank his follow-up effort off the netminder’s right leg from below the goal line — Carolina’s second from behind the Leafs’ net — for the Toronto native’s 17th of the season.

The crowd of 19,097 at Scotiabank Arena jeered the home side’s first shot of the period, and just its third of the game, less than four minutes into the second, but the Leafs would get on the board midway through the second.

Tavares won a faceoff on the power play back to Morgan Rielly, whose initial shot was tipped by Nazem Kadri. The puck fell to Tavares and he buried his own rebound from in close to add to his career-high goal and point totals at 10:55.

Patrick Marleau tipped a shot just wide of the Carolina goal five minutes into the third as Toronto started to push before Mrazek robbed both William Nylander and Kasperi Kapanen on point-blank chances. 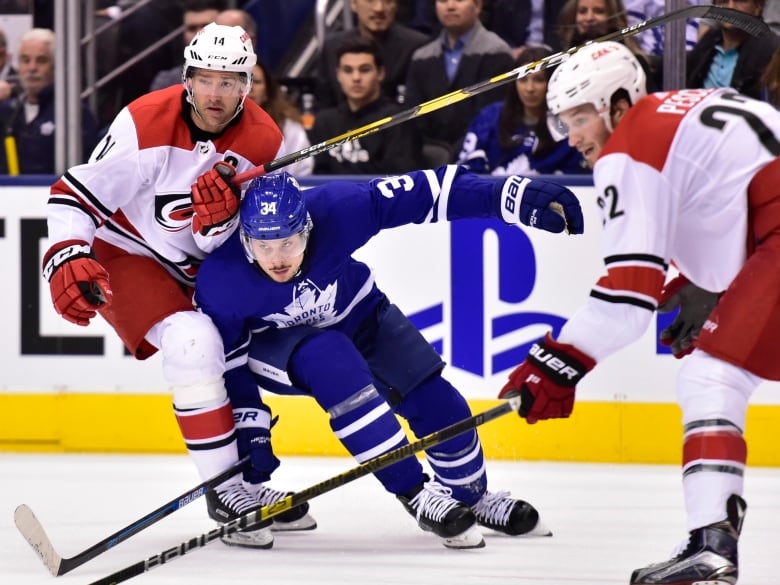 But the Hurricanes hemmed the Leafs into the own zone midway through the period, with Staal firing a wrist shot from the high slot that beat Sparks past the blocker for his 10th to make it 3-1 at 9:36.

Hamilton then added his second into an empty net with under a minute to play.

Sparks, who got the nod after Andersen made 28 saves in Monday’s victory, looked terrible on Carolina’s opener in the first for the lethargic Leafs.

Tavares won a defensive zone draw, but Williams beat Ron Hainsey to the puck and swept a one-handed effort from below the goal line that somehow snuck between the netminder’s skate and the near post for his 23rd.

Lucas Wallmark had a down-and-out Sparks at his mercy earlier in the period, but he rang a shot off the iron.

Toronto appeared to go ahead 1-0 when Nylander took a pass from Auston Matthews and beat Mrazek on a 2-on-1 rush at 15:01, but the Hurricanes correctly challenged for offside.

The Leafs’ two shots in the opening 20 minutes matched their season-low in a first period.