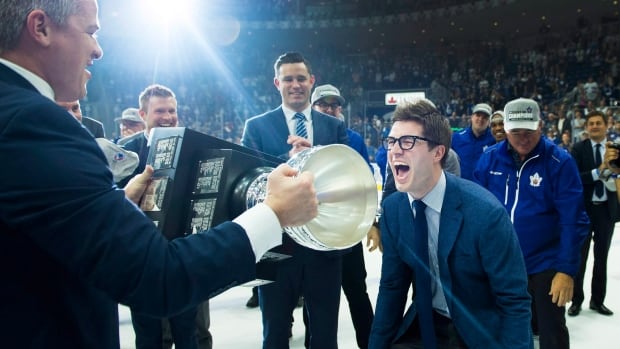 Kyle Dubas promised his wife he would continue to show emotion after becoming general manager of the Toronto Maple Leafs.

He kept his word — and then some — when the Marlies, Toronto’s American Hockey League affiliate he oversaw the last four seasons, won the Calder Cup earlier this week.

Dubas was passed the trophy during on-ice celebrations by head coach Sheldon Keefe, screaming with joy before emphatically raising it over his head.

Dubas is absolutely amped lifting the Calder Cup. <a href=”https://t.co/aGUYrYyWT0″>pic.twitter.com/aGUYrYyWT0</a>

Pictures and videos of the moment spread quickly, and that energy would no doubt again bubble to the surface if he ever leads Toronto’s NHL team to an even bigger prize.

“It won’t happen every single day,” Dubas added. “But if we get to June and things go our way, I’ll be excited.”

Quest for another Cup

That quest to lift the Stanley Cup continues next week for Dubas at the NHL draft in Dallas, where the Leafs have seven picks, including No. 25 overall, and when free agency opens July 1.

“The draft preparation has been ongoing,” Dubas said. “I just wish that some days we had more hours with everything that’s happened.”

And quite a lot has happened over the last five weeks.

The 32-year-old was elevated from assistant GM to the top job by Leafs president Brendan Shanahan on May 11 shortly after it was announced Lou Lamoriello would be shuffled to an advisory role following three seasons in charge.

Lamoriello and Mark Hunter, the club’s other assistant GM, both left the organization 11 days later.

Despite the promotion and increased responsibility, Dubas maintained his role as GM of the Marlies, wanting to finish what he’d started when the Leafs first brought him on board.

“It just speaks to who he is,” said Keefe, who was hired by Dubas to coach the OHL’s Sault Ste. Marie Greyhounds in 2012 before joining the Marlies in 2015. “He’s true to himself.”

As for the next two weeks, Dubas and Hunter ran the Leafs’ draft table together as co-interim GMs in 2015 after Dave Nonis was fired, so he feels ready for the challenge.

“It’s not going to be an unknown,” Dubas said. “You kind of have a sense of how it goes.

“[And] being able to watch Lou the last two years at the draft has been a major boost for me in how he handled interactions with GMs.”

Then there’s free agency, which Dubas also was part of in 2015 for Toronto. But unlike 36 months ago, the Leafs are in a completely different place in their evolution with young stars like Auston Matthews, Mitch Marner and William Nylander — not a club set to embark on a full roster rebuild.

“It was interesting to see that process and learn from that process,” Dubas said of that free-agency period. “Anywhere we can get better, we will.”

‘The door is always open’

But there also doesn’t seem to be any urgency, especially with a number of Marlies — including winger Andreas Johnsson, who led the AHL playoffs with 24 points in just 16 games to grab MVP honours — looking primed to take the next step.

“The door is always open,” Dubas said. “We’re evaluating where things are.”

Keefe’s future is also up in the air, although the only NHL head coaching job currently open is with the New York Islanders after Lamoriello, who wound up in the Big Apple the same day he left the Leafs, fired Doug Weight.

Expectations will grow, and so will the pressure.

Dubas insists he won’t make any rash decisions to put his early stamp on the team, preferring to instead save the emotion for what he hopes are future celebrations.

“I don’t think I have to do anything big, just to do so,” Dubas said. “That would be a disservice to the organization, frankly. It’s not about me. It’s about the players and the coaches.

“If what people describe as a ‘big splash’ happens to make our team a lot better then we’ll do it, but it’s not something that important to me at all.”