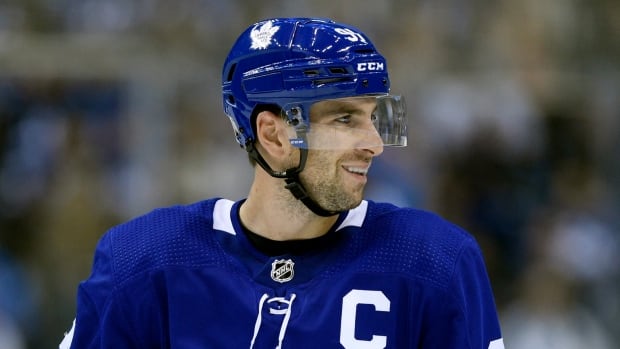 Maple Leafs captain John Tavares will return to the lineup tonight when Toronto hosts the Los Angeles Kings following a seven-game absence with a broken finger.

The 29-year-old suffered the injury Oct. 16 after taking a shot off the hand from Leafs defenceman Morgan Rielly late in a 4-3 road loss to the Washington Capitals.

Tavares declared himself ready to go this morning at Scotiabank Arena.

“Made some really good progress,” he said. “Excited to get back out.”

Tavares took the ice during the pre-game introductions with a ‘C’ on his jersey for the first time in Toronto. 0:33

The Leafs were 3-2-2 without Tavares, including Saturday’s 4-3 shootout victory in Philadelphia against the Flyers.

The star centre looked on course to play in that one, but was held back and will instead rejoin his teammates tonight.

Tavares, who signed a seven-year, US $77-million contract with Toronto in free agency two summers ago, put up 47 goals and 88 points in his first season with the Leafs.

He had three goals and four assists in eight games in 2019-20 before suffering the injury three weeks ago.

The return of Tavares boosts the second line with winger Mitch Marner, should allow better matchups for fellow centre Auston Matthews, and help a power play that’s just 2 for 22 over its last seven outings.

After a roster overhaul this summer, the new-look Leafs have yet to live up to expectations, sitting with a 7-5-3 record heading into tonight’s game.

“We’re at a point in the season now where I think we want to really get that rolling and get to the point where the team is kind of getting past that hump,” Tavares said. “But every year is different and we’ve just been a little inconsistent.

“We’ve lost some tight games, some games that I think easily if we made a few more plays, a little better execution, we’d be on a better side of it and in general that just gives a better feeling.”