Kapanen’s teammate, former roommate and best friend is mired in a contract stalemate with the Toronto Maple Leafs, one that has seen the restricted free agent miss the first seven games of the NHL season.

What’s also plain to see is that no player has benefited more from Nylander’s absence than Kapanen.

The speedster played two games on Toronto’s fourth line to open the schedule before getting promoted to the top-6 forward group alongside star centre Auston Matthews and veteran winger Patrick Marleau in Chicago on Oct. 7.

The spot, occupied by Tyler Ennis at the time, was initially going to be Nylander’s before negotiations on a new deal snaked into training camp and then the regular season.

“I thought it was going to be a good opportunity for me, a good shot to show what I could do,” Kapanen recalled after Tuesday’s spirited practice. “It felt good to put my foot in the door and show people I can play with these guys.” 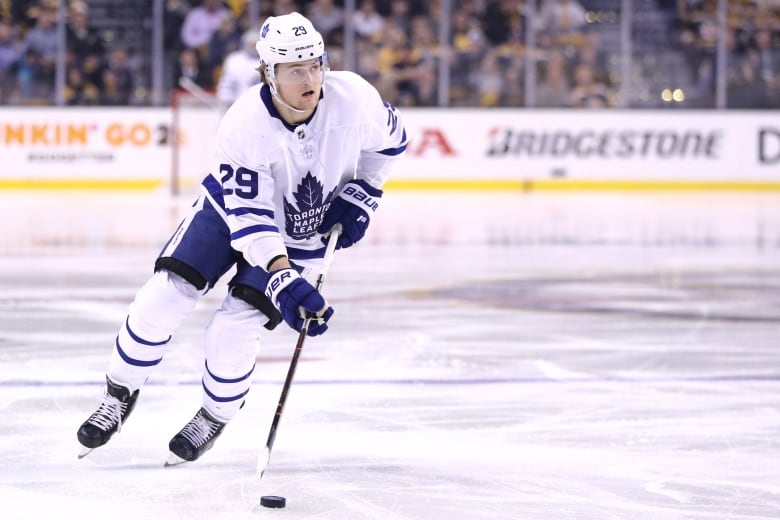 Restricted free agent William Nylander has yet to play this season because of a contract dispute with the Leafs. (Maddie Meyer/Getty Images)

The newly-formed trio scored almost immediately and then kept things going, finishing with a combined eight points in what would turn into a wild 7-6 overtime victory against the Blackhawks.

All told, Kapanen has four goals — including two in Monday’s 4-1 home win over the Los Angeles Kings — and four assists in five games skating with Matthews and Marleau.

“He’s found a way through his play to get an opportunity,” Babcock said. “Now he’s got some swagger.”

To put the offensive outburst into clearer focus, the 22-year-old Finn had just 10 points (eight goals, two assists) in the first 57 games of his previously stop-start NHL career after being selected 22nd overall by the Pittsburgh Penguins in the 2014 draft.

“I came into training camp and I knew what was expected of me and what role I was going to have, and I was completely fine with it,” Kapanen said of starting this season on the fourth line. “I go out there and play the same way. I’m not going to do anything different.

“I got a chance to play with those guys in the third game against Chicago. We’ve been playing well ever since.”

But Kapanen, the son of former NHLer Sami Kapanen, had to wait longer than Nylander, also 22, and many of his other teammates with Toronto Marlies of the American Hockey League to finally get a legitimate shot with the big club.

“My patience is not the greatest, and that’s because of my father,” Kapanen said, with a slight grin, of having to bide his time in the minors. “It’s hard seeing your friends playing here for a long time and scoring goals. Obviously you’re happy for them … but you want to make that leap. Everybody wants to play in the NHL.

“It’s hard some days, but I felt like I stayed patient and I kept working as hard as I could and here I am.”

He said talking to his dad, who had 458 points in 831 NHL games with Hartford, Carolina and Philadelphia, helped get him through the difficult times.

“I’d call him and I’d be upset,” said Kapanen, who Toronto acquired from Pittsburgh as part of the Phil Kessel trade in July 2015. “He really calmed me down.”

Where the younger Kapanen never seems calm is on the ice. His blazing speed causes headaches for opponents and open gaps for teammates.

“He probably didn’t imagine himself waiting this long,” said Matthews, who leads the NHL with 16 points. “But he’s had some opportunities and he’s made the most of them. He’s a key player in this organization.

“A guy that can skate like him, he opens up space for myself, for (Marleau) and even himself because guys have to respect his speed.”

So what happens if and when Nylander and the Leafs, who are thought to be as much as US$2-million apart annually on a long-term contract, finally get a new agreement in place?

“I just kind of worry about the guys that are here,” Babcock said. “So I don’t have to spend much time speculating on that.”

For his part, Kapanen is just glad to finally be getting a chance to prove himself. In the same breath, he misses a friend and teammate sitting at home in Sweden.

“It’s none of my business,” Kapanen said of Nylander’s negotiations. “I’m not here to comment on that. I get to play with (Matthews and Marleau) for now and then who knows what happens once he comes back?

“I’m not trying to take anybody’s spot. He’s pretty much my brother.”

That might be true, but for now at least, he’s doing a pretty good job keeping it warm.