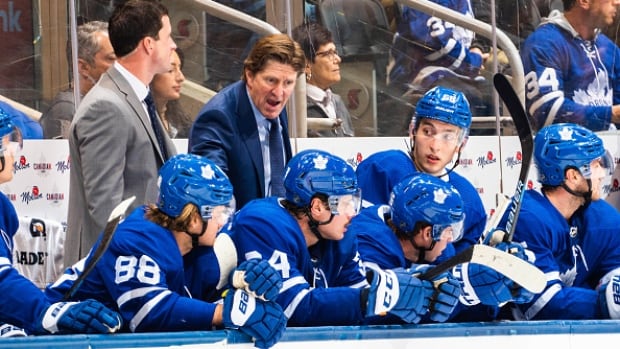 With an off day to clear his head, Auston Matthews made a point of unplugging his hockey brain.

“Just chill,” the Maple Leafs centre said of the approach to 24 hours away from the rink. “Put on a nice show, go for a walk, go for dinner.

Those relaxing 24 hours helped recharge the batteries before it was back to business as Toronto looks to reset after a sluggish start to the season.

The Leafs sit 5-4-2, have won only three of seven home games and are just 1-2-1 over their last four. Monday’s 4-3 shootout loss at home to Columbus was accented by another blown third-period lead, and they were tied 2-2 with the Bruins through 40 minutes at Boston on Tuesday before losing 4-2.

Attention to detail and mental mistakes in the defensive zone have plagued Toronto — in truth, many of the issues date back to last season — but another worrying trend to pop up recently is undisciplined play.

The Leafs have been assessed 18 minor penalties compared to eight for the opposition over the last four games, with a power-play goal against in each contest. Thirteen of those 18 penalties were stick infractions, and that number doesn’t include the OT penalty shot awarded to the Blue Jackets that clinched their victory.

Now a leader on the team with his big-money contract extension and an ‘A’ sewn on his jersey, Matthews said the lack of discipline has been addressed.

“We’re a family here,” the 22-year-old said following Thursday’s practice. “But sometimes you’ve got to yell at your family.”

Leafs forward Andreas Johnsson was the most recent goat after taking two penalties in a 52-second stretch against Boston, including one that led to the Bruins’ opening goal.

“No one wants to take penalties,” said winger Mitch Marner, who like Matthews is now one of the team’s undisputed leaders, especially with captain John Tavares out at least another week with a broken finger. “No one means to take penalties. As a group we’ve got watch our sticks.”

Asked what can be done to stop deluge of needless infractions, Toronto head coach Mike Babcock had a little fun with reporters, mimicking a player trying to dispose an opponent.

“Put your stick on a puck,” he said with a smile. “I hadn’t thought of telling them.”

Babcock is also looking for a better all-around defensive effort from a team that’s averaging 3.45 goals against, good for 25th overall heading into Thursday’s action.

“You look at the guys across from you and you’ve got to out-will him,” said the coach.

In a league as tight as the NHL, a slump of any kind is often cause for concern.

“We’re trying to get better,” said defenceman Jake Muzzin, in his first full season with the Leafs. “We’re having some talks, but let’s not frickin’ go crazy here.”

And despite the troubling start where Toronto has given up the first goal in eight of its 11 games, there’s plenty of reason for optimism when looking at the underlying numbers.

‘We know we have to play better’

The Leafs owns the league’s fifth-best shot differential at even strength (52.9 per cent) and the 26th-best save percentage at 5 on 5 (.906) — which suggests the goaltending hasn’t been up to its usual standards — while the power play ranks eighth.

“We’ve got 71 games to go,” centre Alexander Kerfoot said. “The sun’s still going to come up tomorrow, but we know we have to play better.

Toronto has already played two back-to-backs — a third is on deck Friday and Saturday when the Leafs host San Jose before visiting Montreal — and will have suited up for gruelling 13 games in 25 nights once the final buzzer sounds against the Canadiens.

“That’s all excuses. The bottom line is we’ve got games,” said Babcock, whose team play a league-leading eighth time at home Friday. “We can be better and we have to be better, individually and collectively.”

Matthews challenged himself and his team to do just that following Tuesday’s loss.

That tune hadn’t changed after some time away to reflect.

“You’re frustrated,” he said. “We’re still trying to mesh as a team and come together.

“But when we look around and look at the guys that we have, I think we expect more out of each other.”