For hockey legend Dick Duff, the memory of the Toronto Maple Leafs’ victory in the 1962 Stanley Cup Final is still vivid.

Duff, 82, who won two cups with the Leafs, says the pass from Horton wasn’t the greatest, but he still managed make and make history in the process.

So when he lost his 1962 Stanley Cup ring, Duff was devastated.

“I was kind of disappointed, mad at myself. I said, ‘I had no business doing this. This is impossible,'” the Hall of Famer and six-time Stanley Cup winner recalled.

Luckily, John and Victoria Raymond spotted the ring in the parking lot of Applewood Plaza  near the Queen Elizabeth Way and Dixie Road in Mississauga. They say they couldn’t believe it was real at first.

“When I opened the door to go out so when I looked down I said, ‘What’s that shiny [thing] on the ground?'” Victoria Raymond said. “I gave it to my husband. I said, ‘Check this out,’ and then he said, ‘Oh my God, this is a Stanley Cup ring.'”

Once the couple learned from an engraving that the heavy, 10 karat gold ring belonged to Duff, Victoria was determined to get it back to its rightful owner. 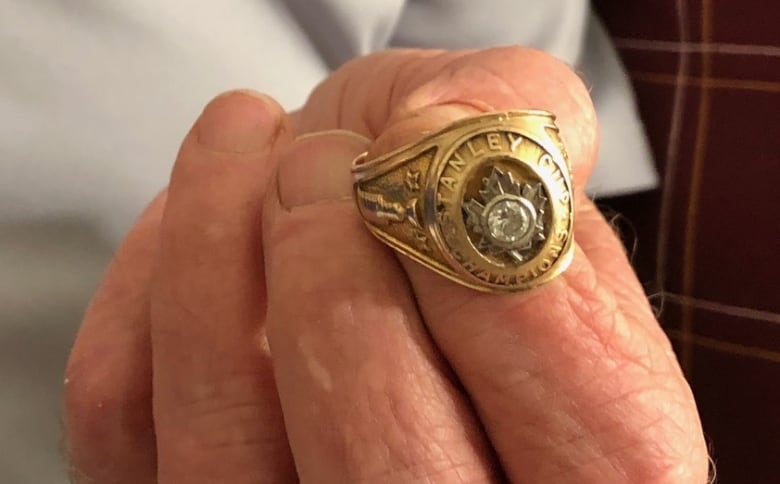 Dick Duff lost his ring once before. It happened on a golf course more than a decade ago. (Adrian Cheung/CBC)

After trying unsuccessfully to reach out to the hockey legend on Facebook, they thought they hit a roadblock, but they found another way to reach Duff.

“I thought about calling Don Cherry. I called CBC, and then eventually a friend of mine who works in the insurance industry,” John Raymond said. His friend knew the family of King Clancy, another Leaf legend.

“They were able to get a hold of Dick and let them know someone had his ring safe and sound, and that’s when I called him this morning, and I had a nice discussion with him.”

The Raymonds were able to give the ring back to Duff in person Friday at his home, where they learned it wasn’t the first time he lost it.

Duff also misplaced it on a golf course about 12 years ago.