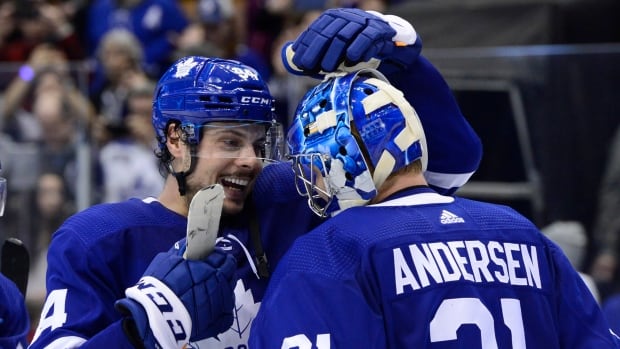 Auston Matthews has been wheeling around his property in Arizona on rollerblades trying to stay in shape.

With the NHL on an indefinite pause amid the COVID-19 pandemic, the Maple Leafs’ star centre even invited a goalie down to keep him company.

Toronto netminder Frederik Andersen, however, hasn’t been forced to strap on the pads.

“I wouldn’t do that to him,” Matthews said with a laugh Thursday. “He’s not a street hockey goalie. He likes to play out anyways.”

When the friends and teammates aren’t exercising or watching video of the Leafs’ roller-coaster 2019-20 campaign in self-isolation as they try to wait out the novel coronavirus outbreak, down time has involved some unexpected binge-watching — reality shows “Love is Blind” and “Love Island” — at Matthews’ enthusiastic urging.

“I watched it like two or three times because I wanted Freddie to watch it,” he said of the first series. “Another friend of mine was watching this ‘Love Island’ show and turned me onto it. Freddie’s not really a big fan of that one. He’ll only watch a couple episodes before he leaves the room.

“I really don’t know what the appeal is. It’s pretty awful, but I’m in deep now so I can’t really turn back.”

Matthews is also hoping he doesn’t have to turn his back on the road to 50 goals and the opportunity for the Leafs to flip the narrative of disappointing first-round playoff exits.

The 22-year-old had scored a career-high 47 goals when the NHL paused its season March 12 amid the unprecedented global crisis that’s killed thousands of people, crippled economies, brought about an era of social distancing, and provided many with new perspective.

Matthews looked like a sure bet to become just the fourth player in franchise history to hit the half-century mark, and with 12 games left in the regular-season was on pace score 55, which would have surpassed Rick Vaive’s record of 54 set in 1981-82.

Only 12 players have filled the net 50 times in a season during the NHL’s salary cap era. No Toronto player has accomplished the feat since Dave Andreychuk’s 53 in 1993-94.

“It’s obviously kind of frustrating and disappointing,” Matthews said on a conference call with reporters. “When you think about those kinds of achievements and accomplishments, being really close to scoring 50 goals and stuff like that, it all becomes irrelevant here talking about human lives and what’s been going on around the world.

“Everybody would love to be playing hockey right now and be able to live their normal life, but this thing’s obviously bigger than sports. It’s bigger than a lot of things.”

WATCH | Can these unusual ideas save sports?

“It’s cool and humbling to be in the same conversation,” Matthews said of Ovechkin. “He’s been a generational player and he’s made a big impact beyond the game.

“There’s unfinished business, but this is bigger than sport.”

The top pick in the 2016 NHL draft, Matthews was enjoying the best season of his young career in 2019-20 — it’s anyone’s guess when or how the league might return when its safe to do so — after missing a combined 34 games the two previous campaigns with various injuries.

He was named one of four alternate captains and has upped his commitment on the defensive side of the puck, especially since Sheldon Keefe took over for Mike Babcock as head coach in November.

There were also difficult moments.

News broke in September that Matthews was facing a charge of disorderly conduct and disruptive behaviour stemming from an alleged May incident outside his condominium Scottsdale, Ariz.

Matthews, who signed a five-year, $58.17-million US contract extension in February 2019, issued an apology in November after the charge was dismissed following a settlement between the parties.

WATCH | Athletes have been social distancing for years:

Rob Pizzo looks at times in sports when athletes have kept their distance.  1:10

On the ice, Toronto sat in a playoff spot at the pause in a season where the roster showed, at times, it could hang with the league’s elite teams. And then there were low points that included maddening stretches of porous defensive zone coverage, immaturity in key moments, and an embarrassing, international headline-grabbing loss to a 42-year-old emergency backup goalie/Zamboni driver.

“A lot of ups and downs … lots of growth and room for growth,” Matthews when reflecting on the last 12 months. “You’re going to go through tough times. We had our fair share of adversity throughout the season.

“In the long run, that kind of stuff builds character and leadership.”

Matthews and the Leafs made the playoffs his first three seasons in the league. They fell to Washington in a surprise 2016-17 appearance, but consecutive seven-game losses to Boston the last two springs were bitter pills.

With the caveat that sports is way down the list of what’s important right now, he wants a chance to see where this season’s road ends.

“It’s no secret three years, kind of the same result,” Matthews said. “You’d love to get to that point again and change the narrative.

“We’ve been working our way to get to that point.”