Whether or not the NHL’s salary cap and future contract demands allow it is another matter entirely.

With teammate William Nylander sitting at home in Sweden as the Leafs and his agent continue to negotiate an end to a contract impasse that has dragged into the regular season, Marner and Auston Matthews were asked Friday what the future holds for them.

Like Nylander, the 21-year-old forwards can become restricted free agents next summer and will no doubt be looking for big paydays when their entry-level contracts expire.

“We have confidence in this room that this team’s going to stay together for a long time,” Marner said after practice. “That’s what we have agents for. The agents are going to talk to the team about all that kind of stuff. We’re all here to play hockey.

“We’ve got a goal we want to accomplish. Everything else we leave up to the agent and the team.”

Some variation of the “that’s what we have agents for” line was repeated over and over by Marner and Matthews. While John Tavares took less money in free agency to sign with Toronto over the summer — the 28-year-old centre still inked a contract worth US$77-million US over the next seven seasons — Matthews wouldn’t indicate if that resonated with him.

“It’s why we’ve got agents,” Matthews said. “I’m not really focused on that. I just want to play hockey and go from there.

“That’s why we’ve got agents.” 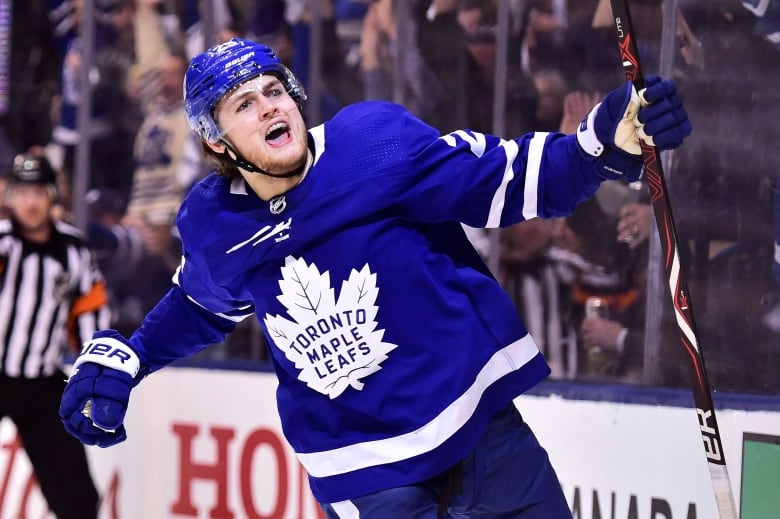 Reports suggest William Nylander, above, wants $8 million a season, while the Leafs have countered with $6 million. (Frank Gunn/Canadian Press)

Nylander, who has little in the way of leverage other than withholding his services, is reportedly looking for a long-term deal with an annual average value (AAV) in the neighbourhood of $8 million.

It’s believed the Leafs’ offer to the 22-year-old is somewhere in the $6-million range per season, which would place him between comparable wingers Nikolaj Ehlers ($6-million AAV) of Winnipeg and David Pastrnak ($6.67-million AAV) of Boston.

With Tavares making $11 million annually, Matthews expected to perhaps command Connor McDavid-level money around $12.5-million AAV and Mitch Marner possibly asking for something around Jack Eichel’s $10-million AAV, that’s a lot cap space for four forwards when you include Nylander at $8 million per season.

Leafs president Brendan Shanahan floated the idea Wednesday of players taking a little less to stay together, citing his three Stanley Cup wins with Detroit, but it should be noted that was toward the end of his career and in the pre-cap NHL.

He also used Tavares as an example of a player sacrificing dollars for a better chance at a title.

“(Tavares) wanted to come here and win hockey games, he wanted to be treated fairly, and he is,” Shanahan said. “And yes, that is what we hope for and expect from our players as we go forward. It’s not for everyone, but for the ones that will play here, that’s what we want from them, and I think that’s what they want from each other.”

Tavares, who signed a six-year, $33-million contract with the New York Islanders on the heels of entry-level pact, said every negotiation is different and that he feels for his young teammates, especially Nylander.

“I was very excited and extremely fortunate to sign the second contract,” Tavares said. “It was setting me up for the rest of my life and (the contract negotiations) I just went through.

“It’s not an easy thing … you just try to control what you can control.”

And like Marner, he said he’s confident these Leafs will stay together.

“Everyone’s buying in and wants to buy into what’s going on here,” Tavares said. “I certainly saw that, and from talking to a lot of players during the (free agent) interview process, I certainly got that sense and was why I felt strongly things can work here.”

“You always want to try to get something that’s fair,” he continued later of contract talks. “You understand the economics and the dynamic of it in trying to build a winning team in the salary cap — doing what you think is fair for yourself, but also fair for the team where they have the flexibility to do what’s needed.”

Marner said the Leafs want Nylander in Toronto, and he is sure the feeling is mutual. The stalemate is also part of a process he could very well find himself in soon.

“It’s about taking care of yourself.”