Auston Matthews scored his first goal of the playoffs and set up another as the Toronto Maple Leafs defeated the Boston Bruins 3-2 on Monday to take a 2-1 lead in their best-of-seven Eastern Conference quarter-final.

Andreas Johnsson, also with a goal and an assist, and Trevor Moore provided the rest of the offence for Toronto. Frederik Andersen made 34 saves.

David Krejci and Charlie Coyle replied for Boston. Tuukka Rask stopped 31 shots for visitors in front of a crowd of 19,611 at Scotiabank Arena.

The Leafs downed the Bruins 4-1 in the Wednesday’s opener at TD Garden before falling by the same score on Saturday.

The Leafs learned less than an hour before puck drop that Nazem Kadri has been suspended for the rest of the series for the centre’s vicious cross-check to the head of Bruins winger Jake DeBrusk in the third period of Game 4.

Scoreless following a spirited first period where the home side upped its physical play after getting dominated in Game 2, the offensive floodgates opened with five goals in the second.

Toronto took a 1-0 lead at 2:38 when Moore poked a loose puck home after Morgan Rielly’s initial shot rattled around between Rask’s pads for his first career playoff goal. The Leafs’ fourth line of Moore, Frederik Gauthier and Tyler Ennis were effective all night with a couple of grinding shifts in the offensive zone. 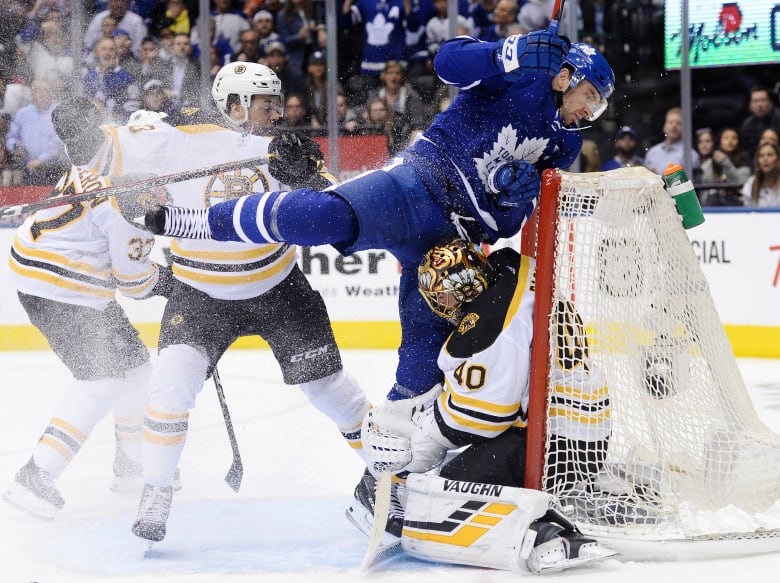 Boston replied just 52 seconds later when Krejci chipped a bouncing puck past Andersen with DeBrusk also on the doorstep.

Rask stopped John Tavares later in the period, but the Leafs centre was checked into the Bruins goalie by defenceman Charlie McAvoy. Rask went tumbling backwards, but stayed in the game after stretching out his neck and left shoulder.

Matthews put Toronto back in front just 12 seconds after David Backes was whistled for high-sticking on Kasperi Kapanen, taking a feed from Johnsson and burying his first beyond an outstretched Rask to send Scotiabank Arena into a frenzy at 10:12.

Mitch Marner, who scored twice in Game 1, but was held in check along with most of his teammates Saturday, made the initial play to Johnsson off the offensive zone draw

Criticized for his play in the Bruins’ seven-game victory over the Leafs’ in last spring’s first round, the 21-year-old Matthews was immediately serenaded by chants of “Aus-ton! Matth-ews!” by the crowd. 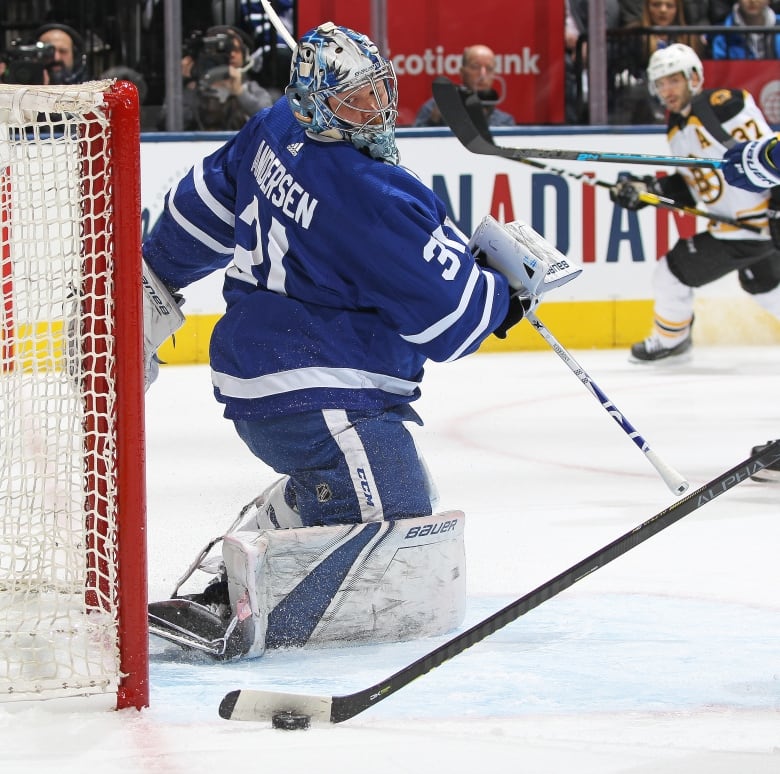 Toronto goaltender Frederik Andersen gets some help from his defence to clear the puck in Game 3 against Boston on Monday. (Claus Andersen/Getty Images)

Promoted to the first power-play unit because of Kadri’s suspension, Johnsson made it 3-1 with his first-career playoff goal with 2:48 left in the period when he roofed a backhand over Rask after a nice feed from Tavares as Toronto connected for a second time on the man advantage after going 0 for 4 in the first two games.

Matthews, who had just two points against the Bruins in the 2018 post-season, picked up the second assist to match his total from last year.

Boston responded on a power play of its own with 37.3 seconds left in the period when Coyle collected a puck off the end boards to score his second of the series.

The Bruins got a power play five minutes into the third when Leafs defenceman Nikita Zaitsev fired the puck over the glass for a delay-of-game penalty, but Toronto’s penalty kill held firm against a man advantage that has connected in every game this series.

After Matthews and Johnsson had chances to make it 4-2 that Rask kept out, Andersen made a diving stop with the knob of his stick on Krejci to keep his team ahead. Boston kept up the pressure with Rask on the bench for the extra attacker, but Toronto held on despite some tense moments late — including two key blocks from Marner — to take a 2-1 series lead.

Kadri travelled to New York for an in-person hearing, meaning the league had the option to suspend the player for more than five games. The 28-year-old, who has now been suspended five times since 2013, will miss anywhere from three to five contests, but the ban won’t stretch into the second round of these playoffs or next season.

William Nylander slid over from the wing to take Kadri’s place on Toronto’s third line behind between Patrick Marleau and Connor Brown.

DeBrusk suited up after leaving Game 2 following the Kadri incident, while Bruins defenceman Torey Krug was also good to go despite leaving Saturday after taking a huge hit from Leafs blue-liner Jake Muzzin.