Matt Murray made 38 saves for his first shutout of the season as the Pittsburgh Penguins snapped Toronto’s five-game winning streak with a stifling 3-0 victory over the high-flying Maple Leafs on Thursday night.

Evgeni Malkin scored early for Pittsburgh (3-1-2) before he and Kris Letang added one each into an empty net. Malkin added an assist on the second empty netter.

Penguins captain Sidney Crosby picked up an assist to move into a tie with Darryl Sittler for 60th on the NHL’s all-time points list with 1,221.

Frederik Andersen stopped 36 shots for Toronto (6-2-0), which came in averaging an NHL-high 4.71 goals per game.

Murray, who picked up the seventh shutout of his career, started for Pittsburgh following three games on the shelf with a concussion suffered in practice Oct. 8. Andersen, meanwhile, returned to the net for Toronto after sitting out Monday’s 4-1 victory over Los Angeles with a minor knee injury.

Leafs centre Auston Matthews, who leads the NHL in scoring with 16 points (10 goals, six assists), was looking to become just the third player in league history to start a season with eight consecutive multi-point games, but was unable to get much of anything going. 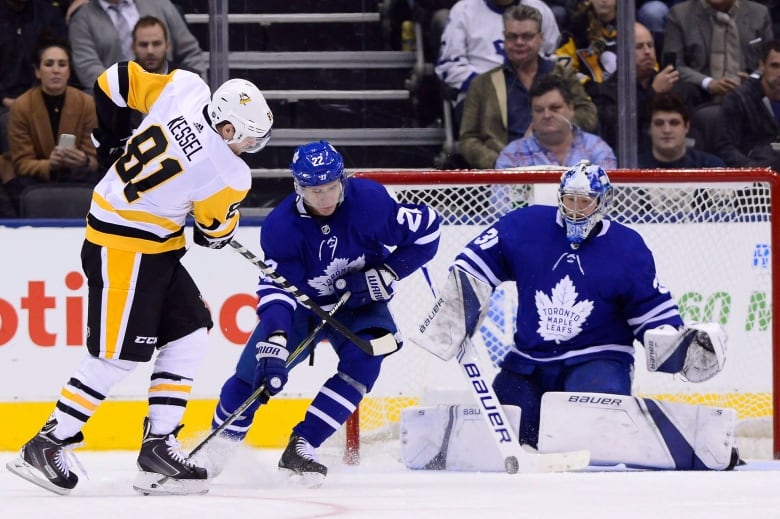 With much of the talk in the lead up focusing around which player holds the unofficial title of “best player in the world” — Edmonton captain Connor McDavid, Matthews or Crosby — it was Murray and Andersen who stood out in a matchup between teams that started the night averaging a combined 8.11 goals per game.

Coming off consecutive shootout and overtime losses to Montreal and Vancouver, respectively, the Penguins took a 1-0 lead at 11:42 of the first period — just six seconds after the Leafs were whistled for too many men on the ice.

Crosby won the draw and the puck found its way down low to Malkin, who fired a low shot that beat Andersen through the pads on Pittsburgh’s 15th shot of the game.

Toronto had a couple of chances earlier in the period, including John Tavares stepping past Letang only to have Murray close the door.

Tavares had another great opportunity off a slick feed from Mitch Marner after Malkin gave the Penguins the lead, but Murray made a nice pad stop to keep Pittsburgh ahead after 20 minutes.

Leafs winger Zach Hyman, who took a nasty high stick that went uncalled late in the first, had the puck on his stick alone in front early in the second, but Murray was there.

Marner had a couple of chances as the period wore on only to have Murray thwart him after every turn.

The increasingly frustrated Leafs pushed midway third — Nazem Kadri had the first of a couple great opportunity with eight minutes to go — but Murray was there whenever the Penguins’ tight structure showed any cracks before Malkin and Letang scored into the empty net.